If you want something modern and Kirov sized with that kind of firepower then I have already made 2 fictive vessels. 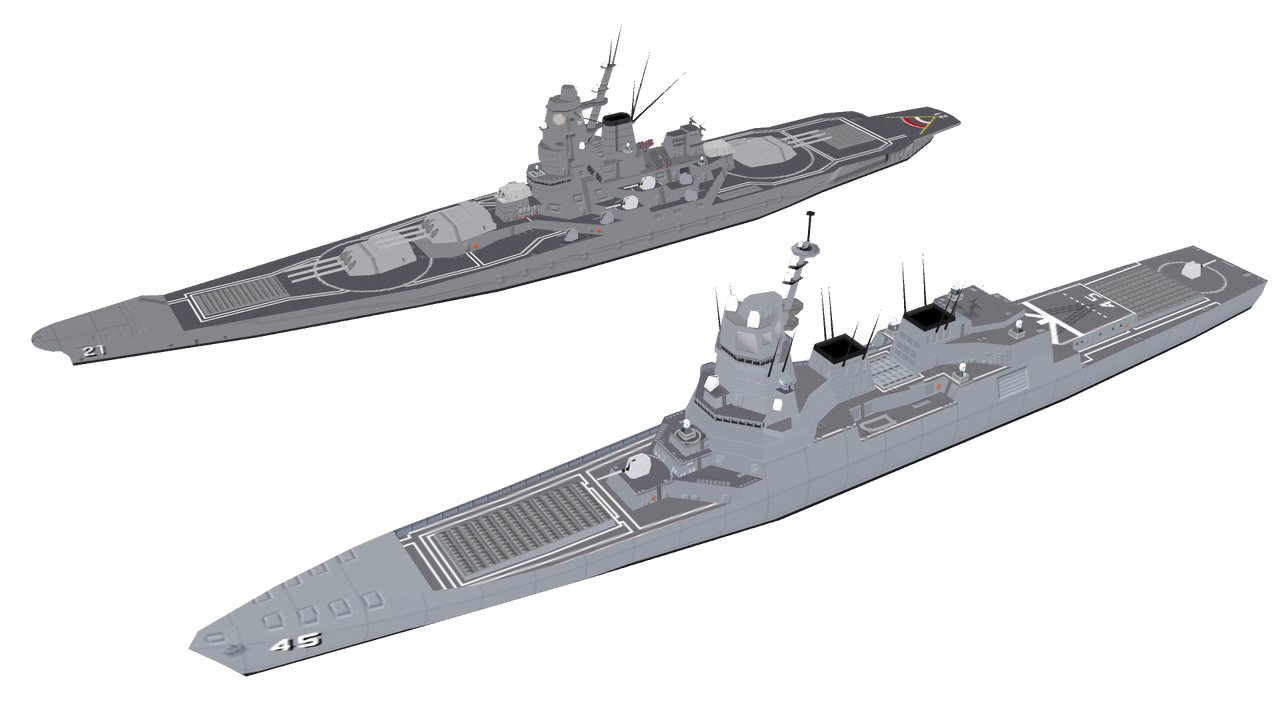 The cells are most likely Mk.41 and there are a bit over 300 on CG and just under 400 on the BBG so assuming we load them up just with Evolved Sea Sparrow missiles they will probably carry 1400-1600 missiles if we also add the Rolling Airframe misiles and the mk.141esque launchers.
It would also be possible to cram a few hundred TASM or TLAM onto these and still have quite a bit of room for AAW and ASW.

I also got an incomplete Lider. At 19.000 tonne and 230m this paper ship is notably heavier and longer than a Zumwalt (Zumwalt is itself notably larger and heavier than Burkes and Ticonderogas). It is also less than 6K lighter and about 20m shorter than a Kirov.
Basically this is probably the closest Russia has come to making a new Kirov. 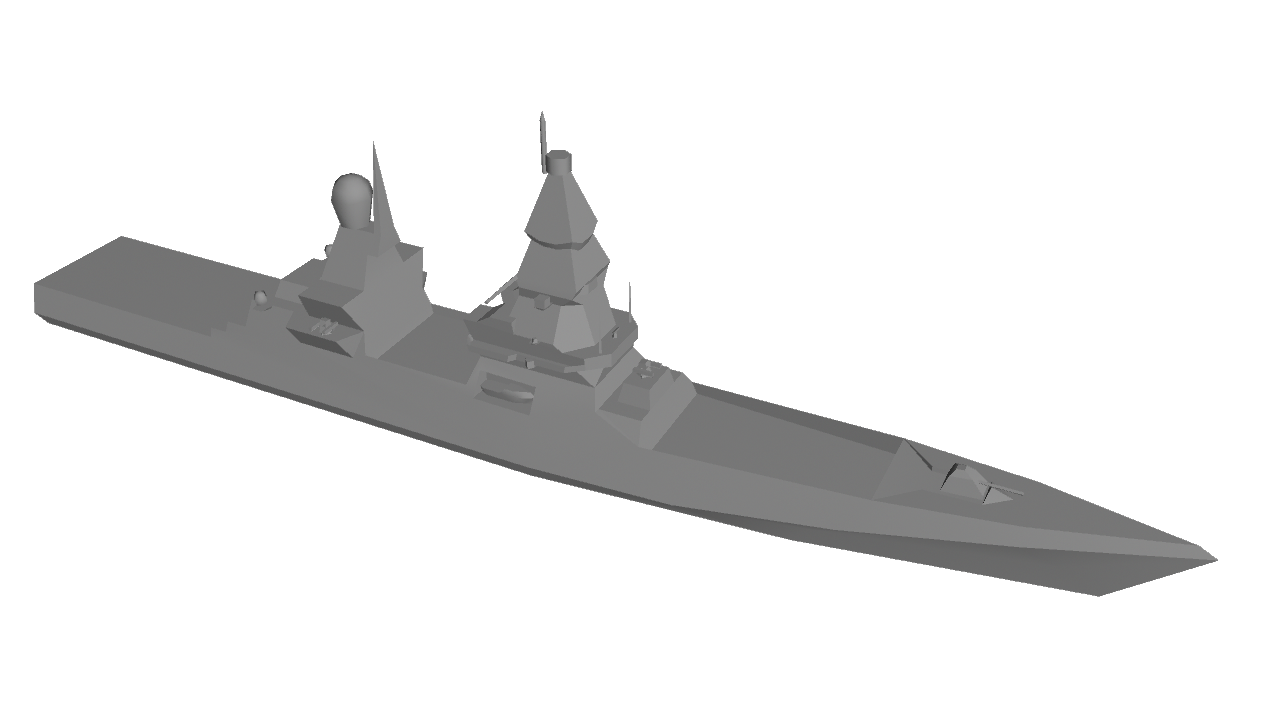 As can be seen though it is not exactly very far along.
Top

Yes, I use 1683 a fair bit although 1676 seems to have totally passed me by definitely one to add to a few fictional models that one!

Lider kinda exist in a limbo of "maybe it is cancelled" so the project might be "done" already. That said I do not think making a model of it will be that time consuming. These stealth paper warships are fairly easy to build compared to less stealthy real world warships that have a tonne of details these do not.

Not really sure when next release is. I have not really had that much time to spend on this recently.
It might also end up being just an upload as is without proper testing and then testing will happen when I have time to save time right now as that is a premium.
Top

Nerei wrote: ↑
Apr 03 2021
Lider kinda exist in a limbo of "maybe it is cancelled" so the project might be "done" already. That said I do not think making a model of it will be that time consuming. These stealth paper warships are fairly easy to build compared to less stealthy real world warships that have a tonne of details these do not.

Not really sure when next release is. I have not really had that much time to spend on this recently.
It might also end up being just an upload as is without proper testing and then testing will happen when I have time to save time right now as that is a premium.

I'm happy to test the models if it's helpful?

Yes time is a commodity no one can buy
Top

Currently my plans is to upload the files to the repository in a dedicated folder with minimal testing done and gradually get that done. Once I think it is unlikely there are issues with them they can become a proper release. That should offer the best of both worlds.
Also I think keeping each set in its own contained folder is a good idea. Proper releases though will keep being everything in one package.
This way I can probably also do more gradual conversions. The process is a bit annoying so when I have a lot of models it is not something I look forward to.
Still have to do it for this set though but hopefully it will not be too long.

In the meantime here is a few updates
For a start the Merkava IIC is now mostly detailed. Still need markings and weathering though. The black parts of the bustle rack will be transparent on the final texture. 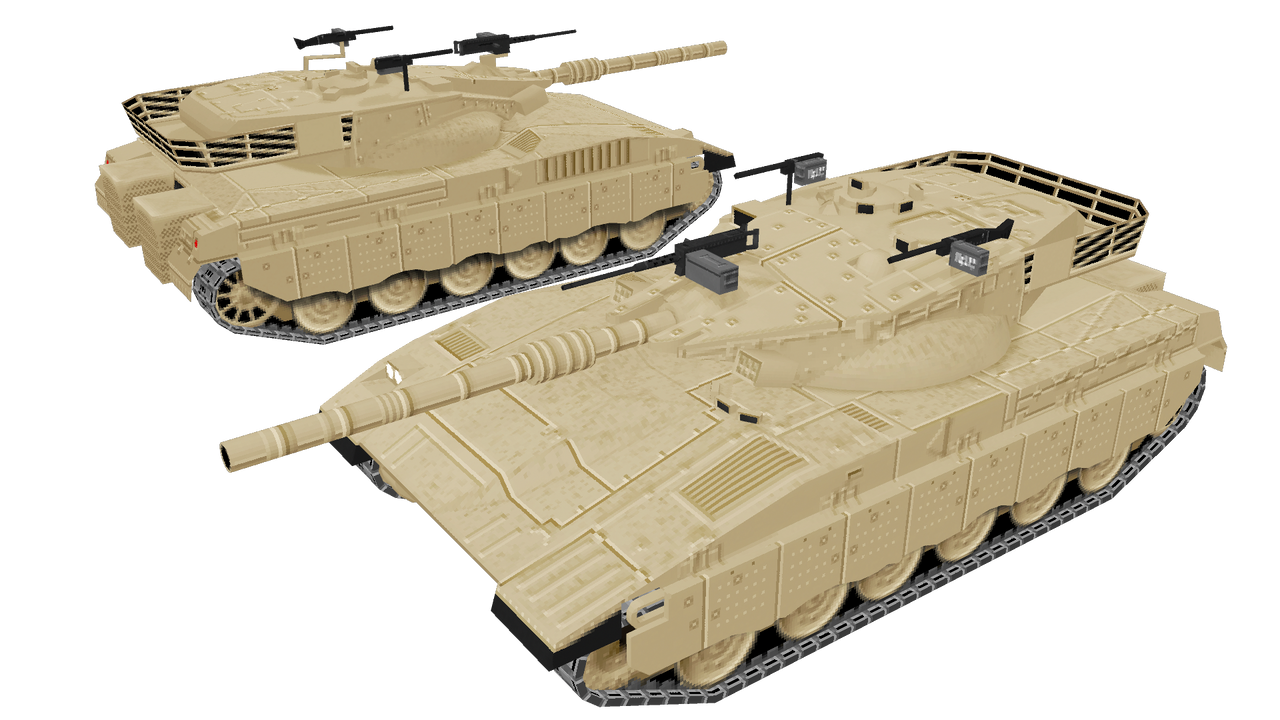 Also all versions of the Sea King are at least mostly done. The Indian version feels a bit bland in places but at the scale the game deals with most of the details on aircraft like old 66 will not be visible anyway so it should be fine.
An example of something that would be tested would be the blades of the main-rotor as their appearance on a white background like on these boards are somewhat different to what they appear like on say the dark blue ocean in-game. 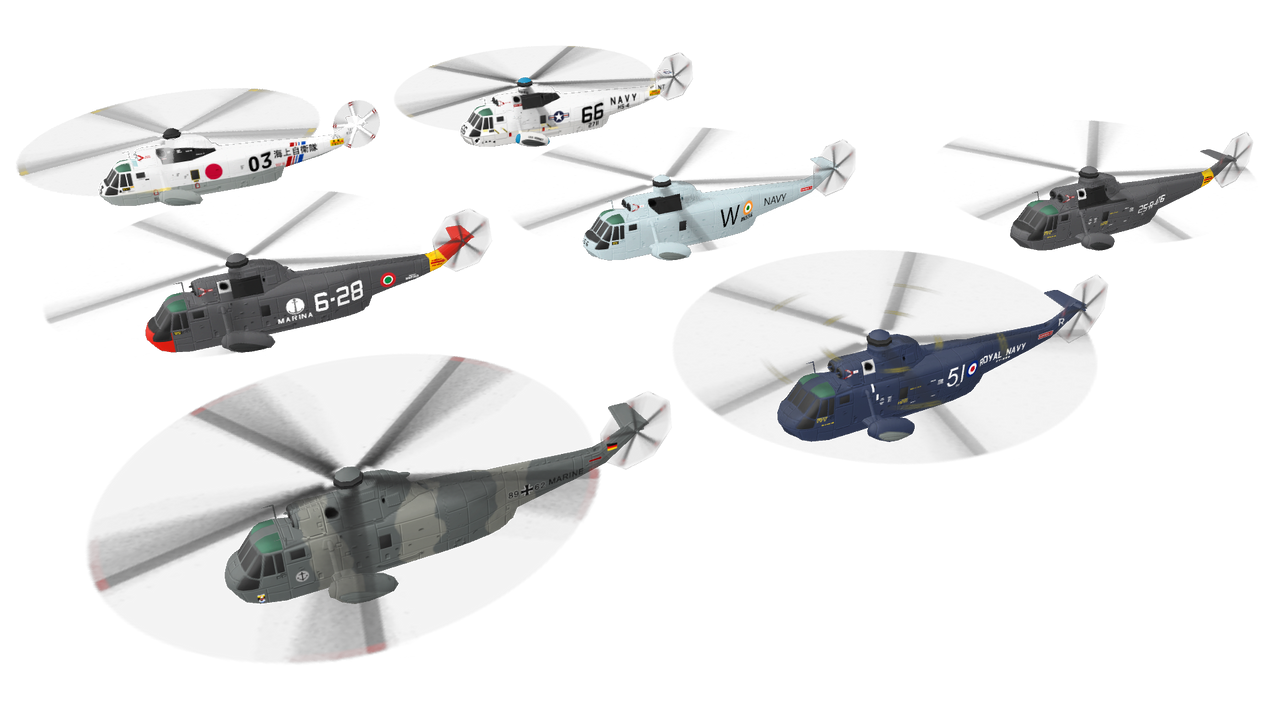 Finally I have an incomplete Borei class submarine. Still a number of detailing left and naturally it will not be red in the end. 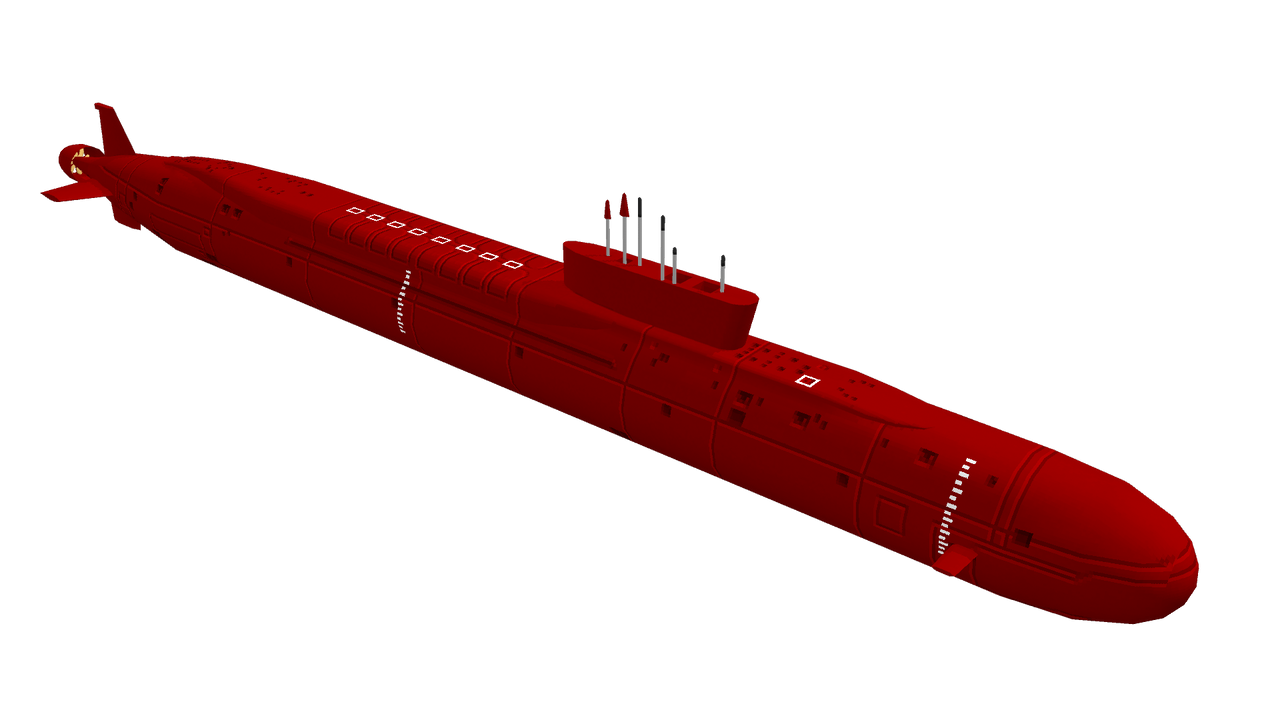 The models are looking great! Borei is impressive lots of little details on it!
Top

The question though is how much will actually be visible. Still that is not the main concern when I make these.

I have not had much time to work on these recently but the Merkava IIC have been beaten up a bit and had some dirt thrown onto it.

Ignore the mirrored markings on the bustle rack. That have bene fixed but I do not have that model on this computer so I cannot make a new render.
Top

Ah yes, exhaust dirt very nice I never really thought but yes I guess the engine is in the front as the rear is a personal exit.
I find it really incredible that after all these years of tanks that the only one that has really changed the original concept since ww2 is Israel.
Top

It is more than just an exit hatch it is the hatch to what is effectively an infantry compartment. I have seen statements that the Mk.2 can transport up to 10 soldiers though most sources say 6. Still that is basically comparable to a Bradley, Ajax or Puma. This is however reducing the ammunition for the main gun. Still it does allow the tank to function as a super-heavy infantry transport or battlefield ambulance. My only concern with this system is that it might make the tank more vulnerable to magazine hits. Still it does offer some flexibility that other tanks lack.

Israeli tanks are solely build around the specific needs of the IDF and they conditions facing Israel is fairly unique. IDF having a lot of post world war 2 tank experience probably helps also. Having General Tal in charge is likely not a bad thing either.
Like all complex pieces of equipment it had some initial issues but by the mk.2 most of the pressing ones where solved.

I don't think it is as much that Israel have changed the basic concept as much as they are building to a very specific criteria which makes their vehicles different from more generic designs like the US or Russia tanks.
Also it should be said that until 1980 with the introduction of the Abrams the US was to some extend really just running with an upgraded version of a late 1940's M-26 Pershing replacement. Yes it was extensive upgrades but

Also I found a Hind. 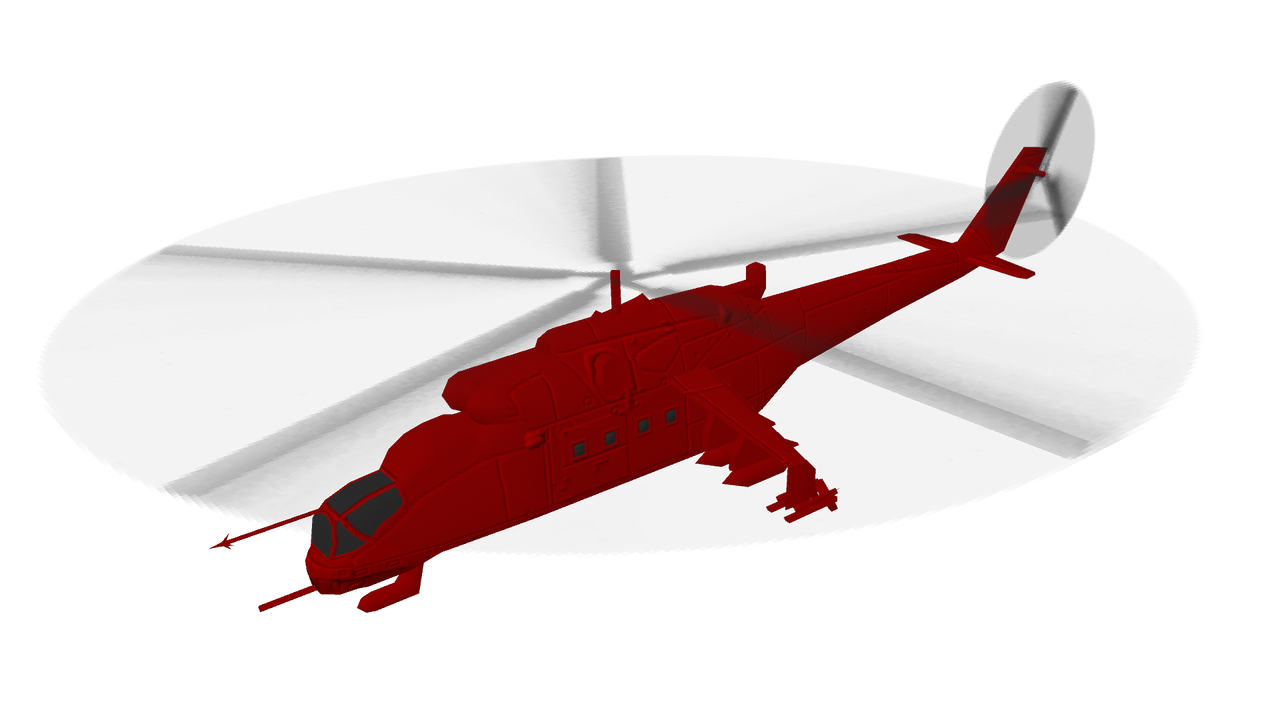 It is not exactly finished but it is fun just how many incomplete assets I have.
Top

Hi Nerei, a long time i don't walk around bgforums (busy with RL stuff and scripting for some mods in TW games).
I've taken a look to your last posts and those models are soooo good looking! (as always

I have not done that much recently myself. Got a few other things going on and I have been sick.
It looks like more than it really is due to most of those models already having a decent amount of work done on them.
Top

Nerei wrote: ↑
May 01 2021
I have not done that much recently myself. Got a few other things going on and I have been sick.
It looks like more than it really is due to most of those models already having a decent amount of work done on them.

Nerei wrote: ↑
May 01 2021
I have not done that much recently myself. Got a few other things going on and I have been sick.
It looks like more than it really is due to most of those models already having a decent amount of work done on them.

I hope you recover soon, take a lot of care and a good rest.

Thank heavens you can take advantage of the work already done on those models. Doing models takes a lot of time and work, i don't know if people realize how much work it takes to work on models, but a couple of months ago i used "MilkShape 3D" app (do you know this app?) to work on a model for Medieval ii Total War game. I just wanted to do something simple: to take an ugly sword away and give the soldier another much more cool sword. It took me around 4 whole hours! just to learn how the app works and do that!! omg.... and it was just a copy-paste kind of thing.
Top

I know of Milkshape 3D though I have never really used it. From what I understand it is mainly intended as a low-polygon modeller for games and the like. I actually started with a program called Moray which is just a GUI for a program called PovRay. PovRay is special in that you basically type your scene. Strictly speaking you can also do that in Maya but here it is the only way outside of using Moray.

A significant part of any complex program is simply learning it. Once you got that part it becomes a lot faster.
I suspect old me that was starting out with Maya and Photoshop would have taken a lot longer to make the Merkava Mk. IIC (and when I look at some of the first models I made for the SR series I would also say the result would have been notably worse)

Still there are quite a few hours of work put into it. Not really sure how much though. I would not really be surprised if it has taken over 24 hours total with most of that time being in Photoshop. There are probably on the other side of 1500 layers in that texture (not sure though as I convert groups of them to smart objects for performance reasons and Photoshop count those as one layer)

There is also the process of finding pictures of strange angles of the tank but as that is something I might have done over months I have no idea how long I actually spend doing that. Some models might in this phase for basically years.
Top

Found out i had a FV4201 Chieftain sitting around. 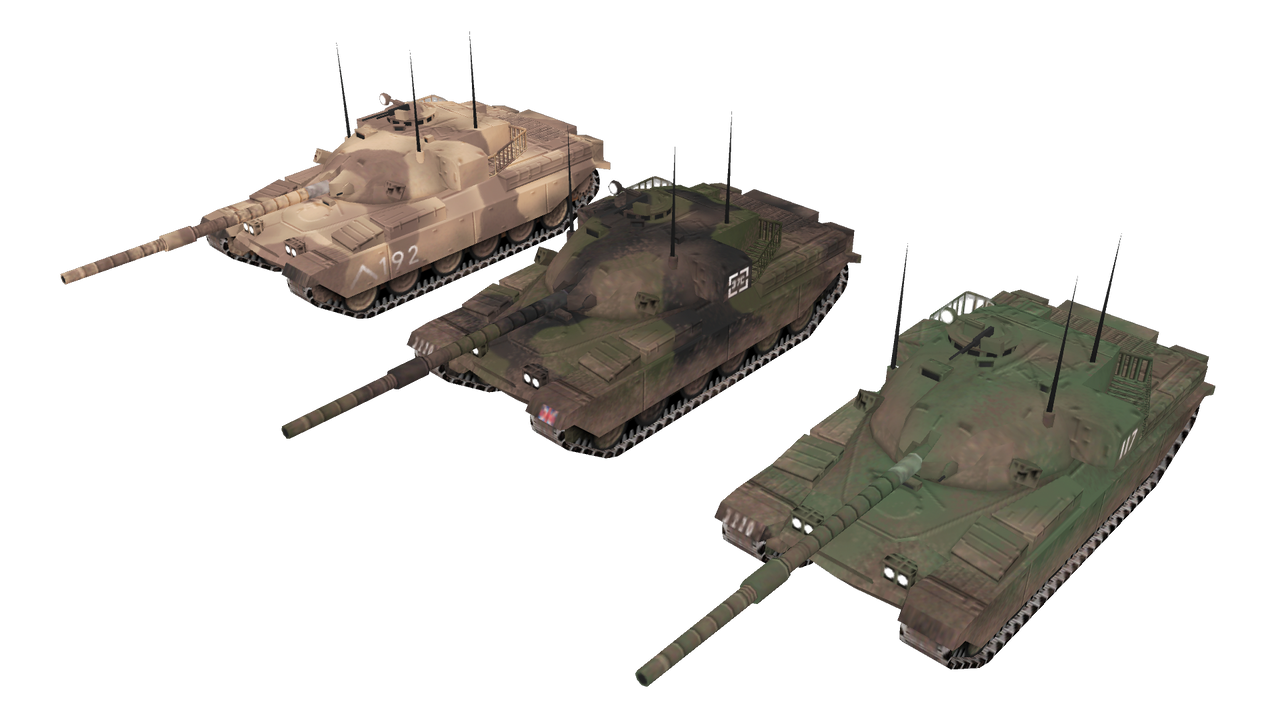 All I have had to do is make a M regional texture and adapt that as a default. The Z regional variant already existed.
Top
Post Reply
1460 posts