I'm interested on how this game run on different setups.
So please download linked savegame (7-zipped or .sav) and
post how many seconds it took for you to run one day and total of 10 days from beginning of save and what cpu and ram you have.

If you want a really good test, do both the first day and the total of 10 days divide by 10 for an average speed.

Did you do anything in particular to this savegame? Modded in any way?
Chris Latour
BattleGoat Studios
chris@battlegoat.com
Top

I have never seen a 7z file and I have nothing to open it with. Perhaps you can upload the actual save file?
https://www.youtube.com/user/GIJoe597
https://discordapp.com/invite/GnXrnxS

No modifications or trainers used on save file. Pure 9.1.89 version used.

From start to Sep 6th with the following settings;

George has answered that before in a thread. IIRC there are 3 primary +1 per region. They double up when there aren't enough threads. There might be some other small ones (sounds, cursors).
Chris Latour
BattleGoat Studios
chris@battlegoat.com
Top

bump - curious for more submissions on this thread

Hi, I think this is a good thread, so here my test

Should it even be full speed?
Camera moved at all from the beginning position?

I ran the given savegame at full speed without moving camera and the results:
1st day: 30 seconds
10 day average: 22 seconds

FPS was mostly stuck at 42 for some reason. sometimes plunged shortly to ~20.

For me the speed seemed slower than average of what I see. Maybe it's because it's in 2026.

Also I tweaked Radeon settings a lot and no matter what I did the speed of days passing as well as FPS is the same. I assume the CPU is the bottleneck.

speaking of which, why is there an FPS cap at 42? Why does it plunge to lower than 42 even when just moving around the map? I'm pretty sure rx 470 is enough to run these graphics at 144hz... Quite annoying when it lags for no apparent reason. 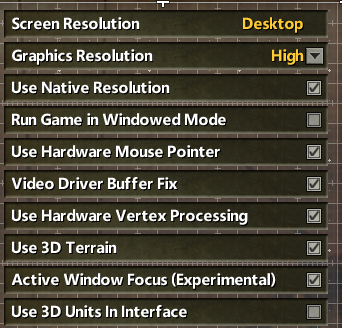 Tests ran on game version 9.1.249.
Windows 10 Build 15063.447 (1703) not updated since early 2017. CPU vulnerabilities are not mitigated in this build. Not sure if that helps the performance any.
Hope this helps!
I am satisfied with the game speed, except for the low FPS and camera lag when looking around the map even with the game paused (it screams unoptimized)
Top

Apparently not. It's probably problem with draw calls being CPU intensive an limited by it.

When I have units enabled and some overlay active, I get 4 FPS at max zoom out with my RX 580 while paused. When I disable units and overlays, I get to about 22 FPS.
Top
Post Reply
46 posts