I have just downloaded GC. I thought what better way to get started than to jump in with an AAR.

Brazil
Standard settings from start up, except, I unchecked enhanced spotting and ranges.

I usually do not concentrate on reporting economic numbers, all I pay attention to is having enough money to do what I need to do. I may from time to time post a screen shot of some economy numbers.

One of my â€œrulesâ€ is to not use massive amounts of units and I will try to use the best available unit in each situation. I generally do not build more than 2 wings of fighters, fighter bombers or Strategic bombers. For my purposes a wing is 7 squadrons, so at most I would have 14 squadrons of fighters for example.

I also create naval fleets that make sense. i.e. not have a â€œstackâ€ of 7 carriers.
Normally a single fleet will consist of 7 ships something like this depending on what I have available of course

I will modify it for this AAR as Brazil currently has no fixed wing carrier capable combat aircraft.

First order of business, turn off all minister functions and auto-build. 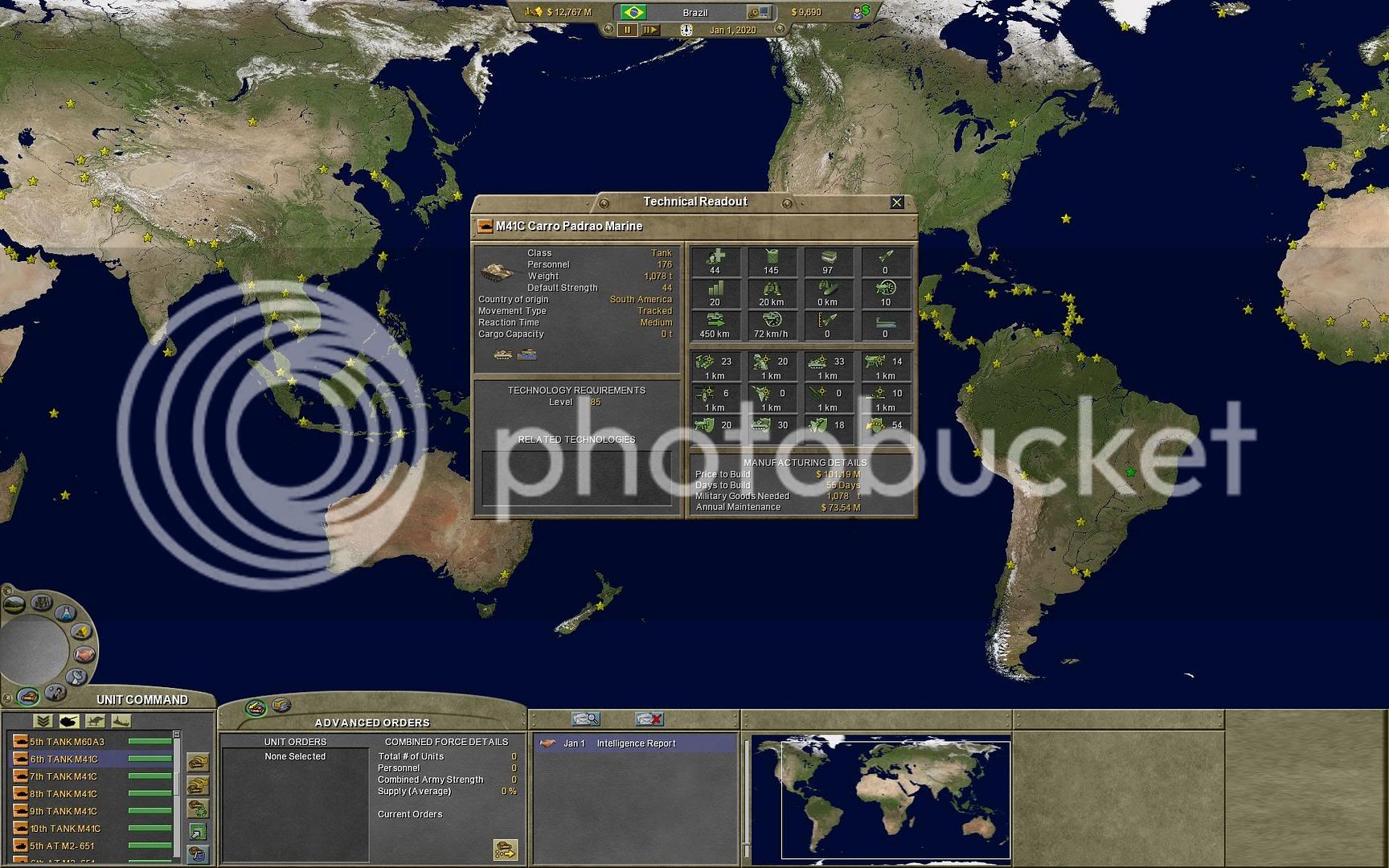 Now to review units available to us and place appropriate units on order:

Land:
Due to the large number of rivers we require a unit that is amphibious.
The EE-11 Mk VII Urutu APC will be our Infantry choice for now
18 ea ordered

Air:
With vast amounts of rough terrain Air Power is essential. We need a mobile force that also packs a punch without using tons of missiles.
The A-4KU/M/N Skyhawk II fills that role nicely. Ground attack range of 24K and a damage rating of 46.
14ea ordered

Navy:
We cannot currently build any DD/CA. This forces us to start production on the F-40 Niteroi frigate.
8ea are ordered to compliment our current force of 6ea

Missile:
We have no designs for any air to air or naval launched missiles at this time.

Research:
We have the ability to research 2 techs and I max spending in all categories.
We choose;
Dark Matter Theories (+2% research Eff)
Anti Ship Missiles (To better protect our shores from invasion)

25th Argentina declared war on us.

Feb 2020
7th An S-2E Tracker Patrol squadron flying along the border of Argentina notices a lack of troops. The blocking forces in Uruguaiana and Sao Borja are ordered to attack across river into Paso De Los Libres and the large military base at Posadas. No resistance in Uruguaina and light resistance in Posadas. Both objectives taken.

8th 1st Inf (AAVP7A1 Alligator) is orderd to take the town of Oberaâ€™ when recon reports no hostiles.

1 Arg Infantry BN of VCTP ICV attempts to retake the town and military base at Pasados. They take heavy damage and retreat.

Now an Arg C-130 hovers over the area. It is time to introduce them to 2 sqds of Embraers. It retreats also. 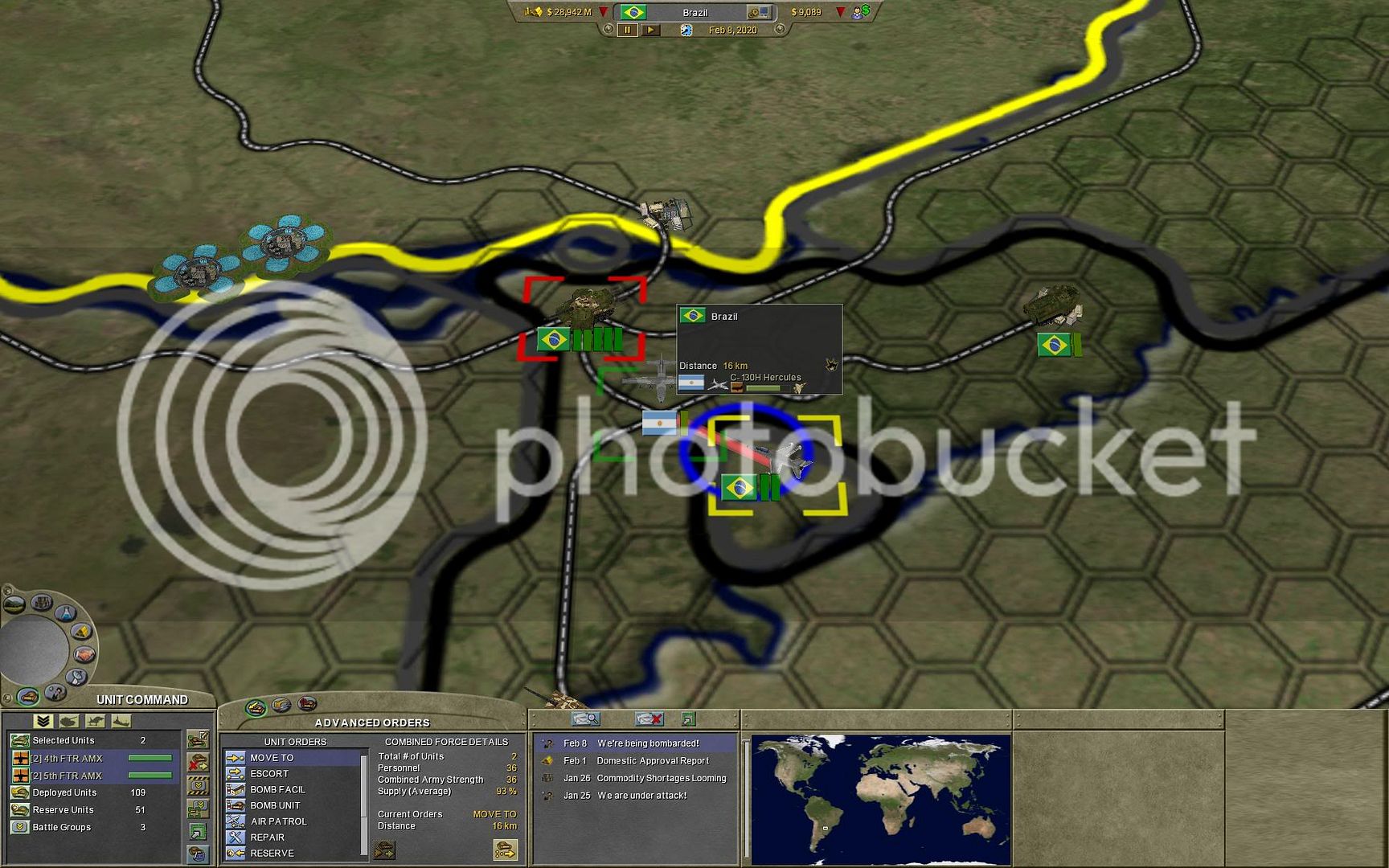 9th A lone supply sqdn attempts to make it past Paso De Los Libres.
They pay for that mistake.

2 army groups are ordered to assault Eldorado and Puerto Iguazu. 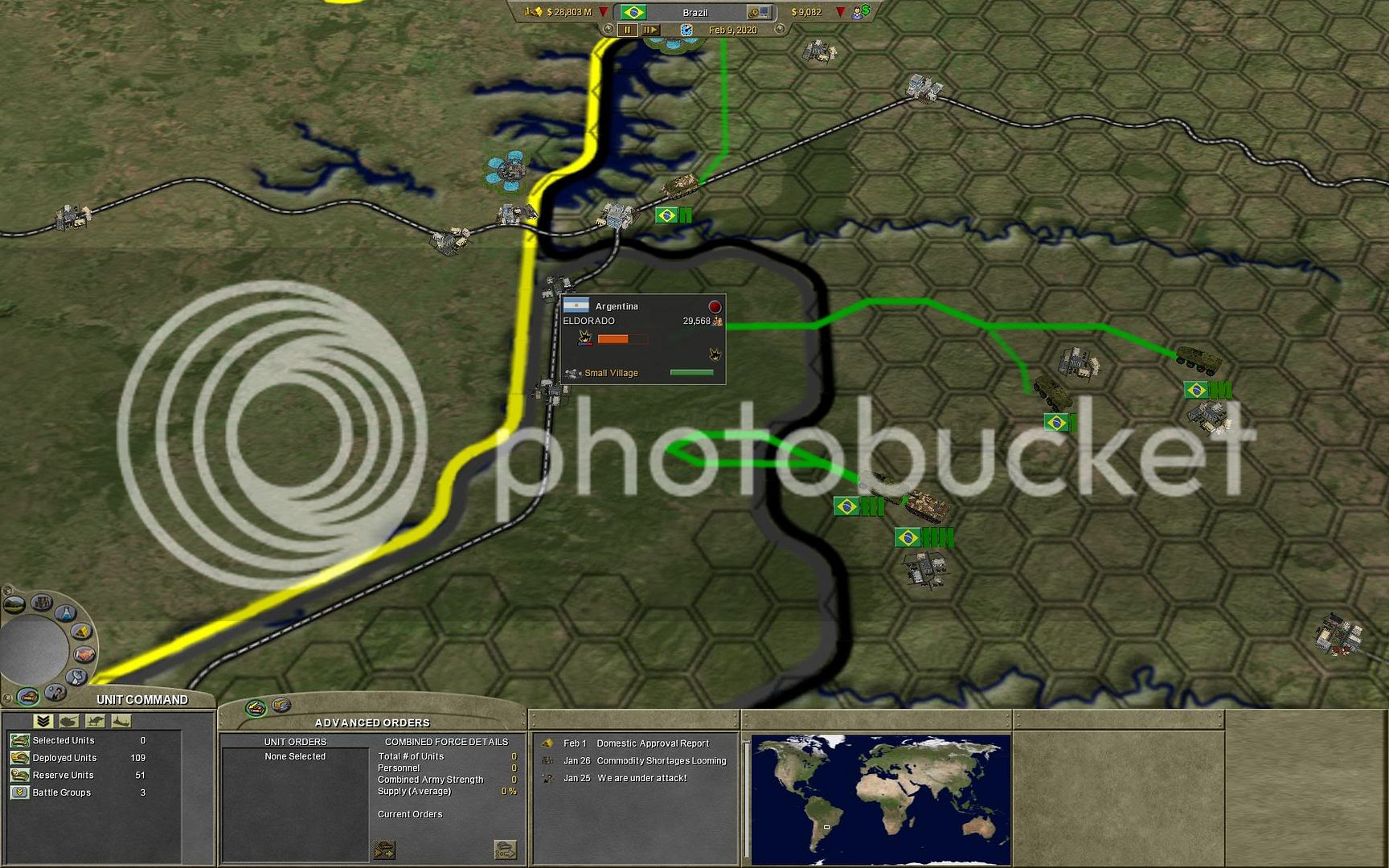 10th Both towns are taken by our forces.

This allows us to consolidate our forces from just outside of Paso De Los Libres north to the border of Paraguay.

Once the line is secure, plans will be put into motion to capture Corrientes.

12th Our navy is moving full speed to Rio Grande. There they will consolidate and set out in fast attack fleets along the coast of Argentina.

The barracks at Posadas has been repaired! 1st inf is ordered to repair and refit as they took damage from the Arg Bn that attacked Posadas.

24th We order two army groups to advance towards Corrientes. Our Awacs paints an Arg Eng Bn attemping to cut their line of supply.

The F-5E Sq is ordered to intercept and destroy.

They attack and at the same time recon units/skirmishers close off his line of supply. The F-5Es make short work of them.

25th Once again our Patrol aircraft paint Args moving to engage us at Paso De Los Libres, One AT Bn and one Inf Bn.
The army group just outside town is notified and a 2nd group is ordered into a flanking position.

The Args turned north just prior to engaging the forces protecting Los Libres. This placed them in contact with the flanking group. While they are engaged, 1st group is ordered to hit them from the south and east.

The Arg AT Bn escapes, however we manage to pin the Inf Bn down and annihilate them

All Army groups are ordered to move the line forward to the intersection of 14 and 127, west of Bella Union, Uruguay and stretching north to Corrientes.

At the same time Army groups 5 and 6 are ordered to take Corrientes which is defended by 2 garrisons.

26th Group 6 rolls into Corrientes.
After consultation with Army Command it is decided to press on, to speed up our push into Argentina. Immediate objective is to secure the Arg land east of the river,
and set up blocking forces on the three river crossings at Resistencia, Santa Fe. We will try for Za'rate if possible but it is not a primary objective at this time.

We encounter an Arg Inf Bn and make short work of it.

Our Patrol Sqdn is orderd forward for greater coverage of the area in question.
27th In addition to the Inf Bn we discover a Tank Bn heading SW.

Our F-5Eâ€™s are called up. They take out the tanks. And as they are returning home the Patrol planes paint another Arg Inf Bn.

Mar 2020
7th Our immediate objectives of securing all land east of the river has been met. All forces are repairing and re-supplying as well as waiting on supply lines to catch up 100%.

After a brief period of replenishment, forces will once again be ordered to attack. During this respite, I will take the time to entertain some diplomatic offers and take stock of production/output.
A non aggression pact is signed with France.
We are woefully short on Petro. Construction started on 24ea new wells in the area between Barra Do Cordo and Codoâ€™. As well as supply depots.

8th Army group 1 decides to recon in force. They push to the bridge leading to Zarate. Halfway across they discover 2ea Arg transport ships and take them out.

13th It was decided to have another go at Zarate. This time success.

15th Argentina offers peace. My daddy always told me, never start a fight, but finish every fight you get into. Declined

21st It has been a very rough slog through garrisons, but we have made some headway towards Buenos Aires.

I still have very limited Inf Bnâ€™s to work with, so we are turning this into an artillery duel mostly.

23rd We are very short on many resources but have managed to get the majority of our forces into the battle for Buenos Aires. The navy has arrived and commenced bombardment action.

24th The huge military base on the outskirts of Buenos Aires falls. Their Air Force flees.

25th The assault is preceding well. Money is soon going to be an issue. As soon as we have stabilized Buenos Aires and suburbs we will pause to repair and re-equip. This will allow us to review our resources and production.

26th Argentinaâ€™s capital is ours! Suburb clean up time.

To the victor go the spoils.

27th All naval and air forces are ordered into reserve. All existing garrisons are scrapped.

28th With the annexation of Argentina we acquire one additional Research Center. Biomass Incineration added.
30th The first of our 36ea Coal power plants are coming on line.

On the same day 3ea Land Fabs we captured from Argentina become active.

May 2020
3rd Free Trade with Turkey signed
4th Full Transit with Turkey signed.
15th Oil fields start to come online. We are now self sufficient in oil.
16th Coal mines start coming online.
17th I have now connected every city with roadway. Not really required but I cannot let any city be unconnected by a major highway.
25th The last of 20ea Ind Gds factories completed today. We will still need about 20 more. Construction is started on them.
We are getting short on power again. 72ea Coal power plants started.
28th Education and Infrastructure funding is maxed.

June 2020
19th All Uranium mines are now complete and we are self sufficient. Currently, the only pressing concerns are Electric and Ind Gds. Facilities are in construction to cover both areas.
21st Analog Fly-by-wire completes. Water Conservation added.

The largest military in the world is the U.S. with 3 million staff. Also they have the largest build capacity with 48/29/10/25. It is roughly double the nearest competitor, which is China at 23/11/7/12.
Locally, Venezuela appears to be the most imminent threat looming to us.

9th The first of 72ea Coal mines has started coming online.
As soon as the economy and production are where we need it to be, we will concentrate on paying down our debt.
21st Tech Level 96 reached.

24th During a meeting of top commanders it was pointed out we lack in capable anti air units. Unfortunately, at this time, we are unable to manufacture any of our own. We seek assistance from France on this issue and after lengthy discussions between our two nations, it was agreed we would purchase the designs for the SAMP/T ASTER 30 GARDE. So keen were they to have a buffer against communist intervention in S. America, they sold it to us for less than half its value.

We place the design in the hands of our capable Defense Minister and task him to manufacture 9 units as soon as possible.

DUDE! to many images! it takes ~5 mins to load your post!
Happy Linux user!
Links: List of Mods
Top

Very good AAR, but you charged against Argentina, nice any ways.
Top

Sorry, It only takes about 10 seconds to load this post for me from this website. But I am probably closer to the host.


oberkommando wrote:Very good AAR, but you charged against Argentina, nice any ways.

It was self defense remember, they attacked me.

It was self defense remember, they attacked me.

I am new to the series.. I really like the way that you went step by step w the screenies. it cleared a lot of questions that I had.
Top

Wow, been some time since I looked at this. It was my first game with GC.

I am glad you enjoyed the AAR. If there are any questions you have about SR2020 the search function works very well on these forums. If you cannot find what you are looking for, post a thread several helpful people in here.


Will you be posting an AAR at some point? I do like reading them.
https://www.youtube.com/user/GIJoe597
https://discordapp.com/invite/GnXrnxS