Feels like I finally have enough to drop a few "devblogs" about the future update.

I'm carefully replacing every important OOB in the world according to any available info I can find. (Wiki, Pentagon, official Army structure, etc) So far, these countries are done/mostly done:

Here's a showcase screenshot for Germany: 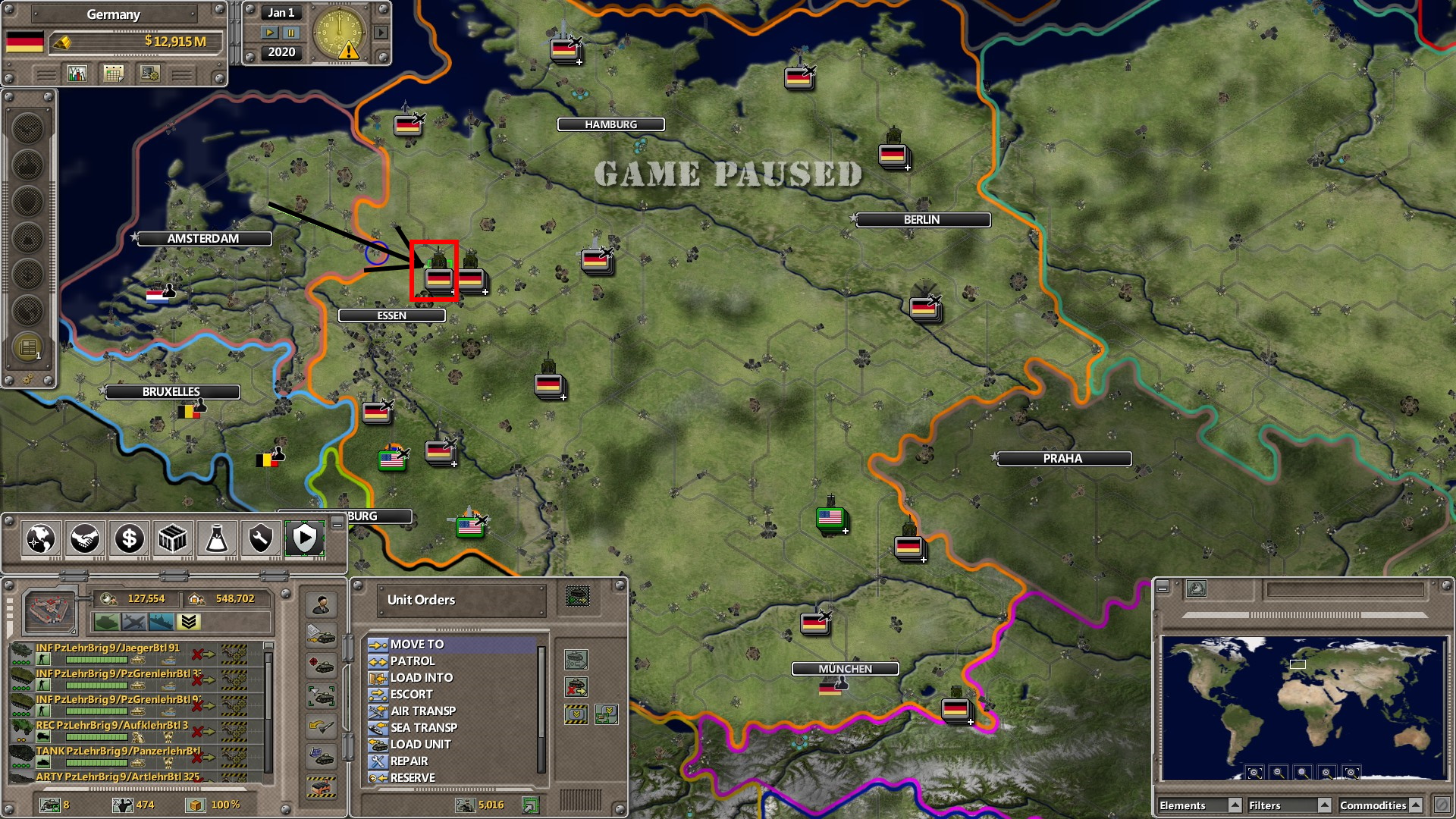 (Working right now on a Puma IFV and Fennec model for them.)

The German army is a small but well trained fully mechanized army. They field a strong composition of Leopard 2A6/2A7, Puma IFV and MTK Boxer. What they lack in men, they make up in armor.
Their fallschirmjäger regiment is also capable of being airdropped on a moment notice. All in all, the German army is now a highly mobile hard-hitting army.

Worth noting in this screenshot, Ramstein AB and Spangdalem AB(among others) are now also in the 2020 start hosting the US squadrons they should alongside the US 2nd Cavalry Regiment in Vilseck, Germany.

Next SITREP tomorrow to talk in more detail about the US brigades/squadrons in the world alongside the new models and units for them.
Last edited by Cyrus Jackson on Dec 03 2019, edited 1 time in total.
Top

Starting with the US Army, with the new OOB and unit spawn, the US Army is now a mobile well equipped, well-trained combat, combat-hardened force.
Active-duty divisions were given 2 veterancy levels, the National guard 1, The 75th Ranger RGT 3, and SFs the maximum level at 4.
(Will also happen for highly trained armies)
Their ground force is separated into a few distinct categories.
The Infantry Brigade Combat Team(IBCT), these lighter brigades are mostly composed of either MRAP for active-duty divisions(new unit) or hummers for National Guard divisions.
The Airborne Infantry Brigade Combat Team(IBCT), your usual airborne leg infantry brigade.
The Armored Brigade Combat Team(ABCT), a dangerous mix of Bradley and M1A2SEP.
The Stryker Brigade Combat Team(SBCT), a highly mobile mix of all kinds of Stryker. A few lucky brigades also received the brand new Stryker Dragoon. A deadly Stryker with an unmanned 30mm turret+Javelin.
Here are the reworked Strykers:
IFV->MGS->Dragoon

The US army can also complement their main force with a plethora of deadly Special Forces ranging from the 75th Ranger Regiment shown here at Fort Benning with their brand new model: 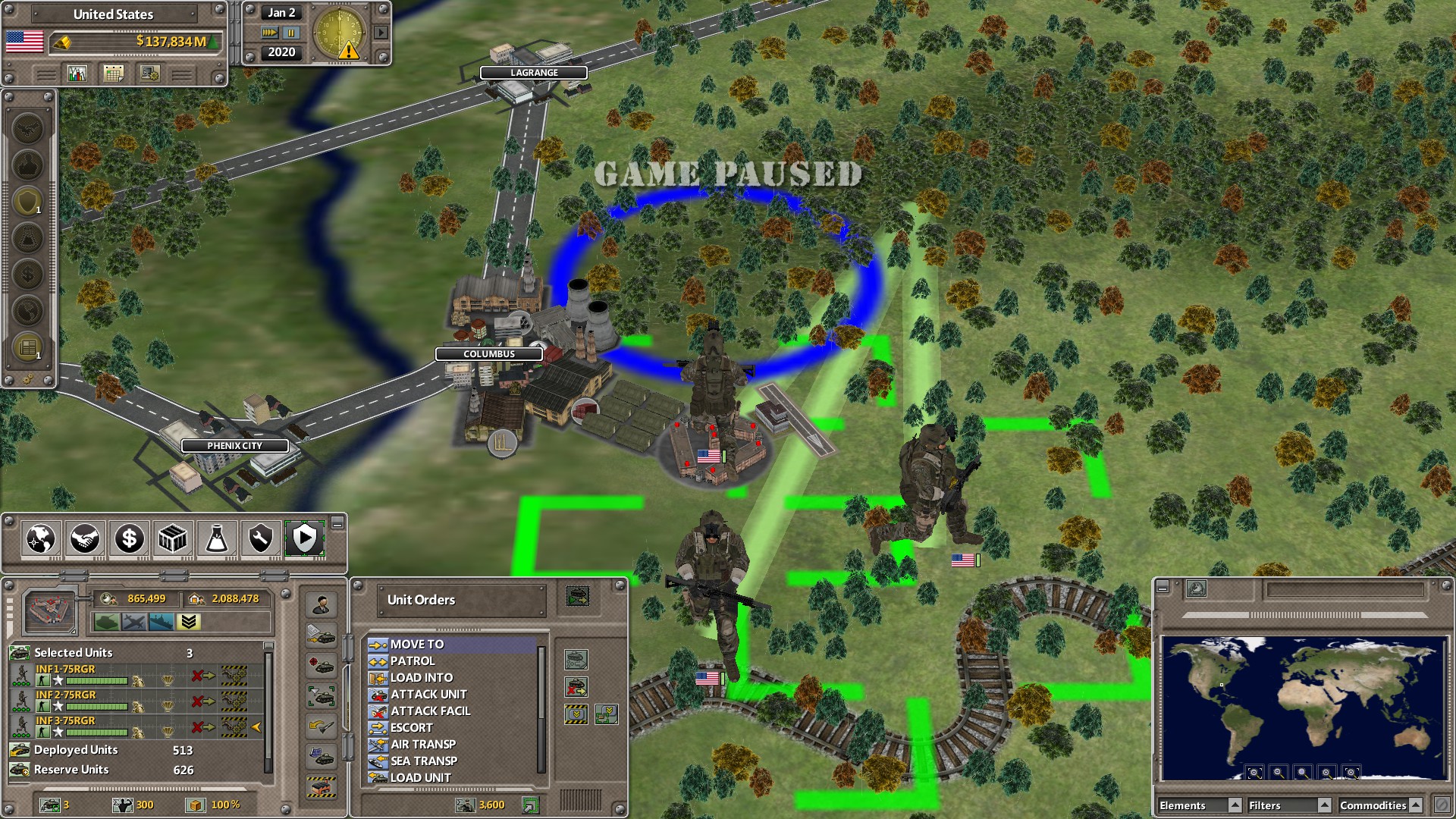 To ensure their presence in the world, a US player will also start with multiple units already deployed in the world. The 2nd Infantry Division, an SCBT equipped with the brand new Dragoon can be found in South Korea
the 1st Cavalry Divison(ABCT) can be found spread out in Poland, Romania, and Hungary to simulate NATO exercises. The 173rd Airborne brigade can also be found near Vicenza in Italy, ready to respond to any crisis in Europe. There's more units here and there but it would be too long to talk about all of them.
All in all, this will give a US player a much easier, enjoyable experience to rapidly deploy an entire independent brigade in the world while the US AI will be much more present in the world.

Which leads me to the USAF. The USAF is the premiere airforce in the world and I feel like the game failed to reflect it enough. The USAF was given 2 veterancy rank(not fully implemented yet) while their unit inventory is much more complete and modern than before.
Multiple US bases were added in the world, 3 bases in the UK(Fairford, Mildenhall, Lakenheath), 2 in Germany(Spangdahlem, Ramstein), 3 in Japan(Kadena, Yokota, Misawa), 2 in Korea(Osan, Kunsan).
Every US squadrons were faithfully named and added to their home base in the USA and around the world.
Here, we can see Kadena AB with every unique squadron: 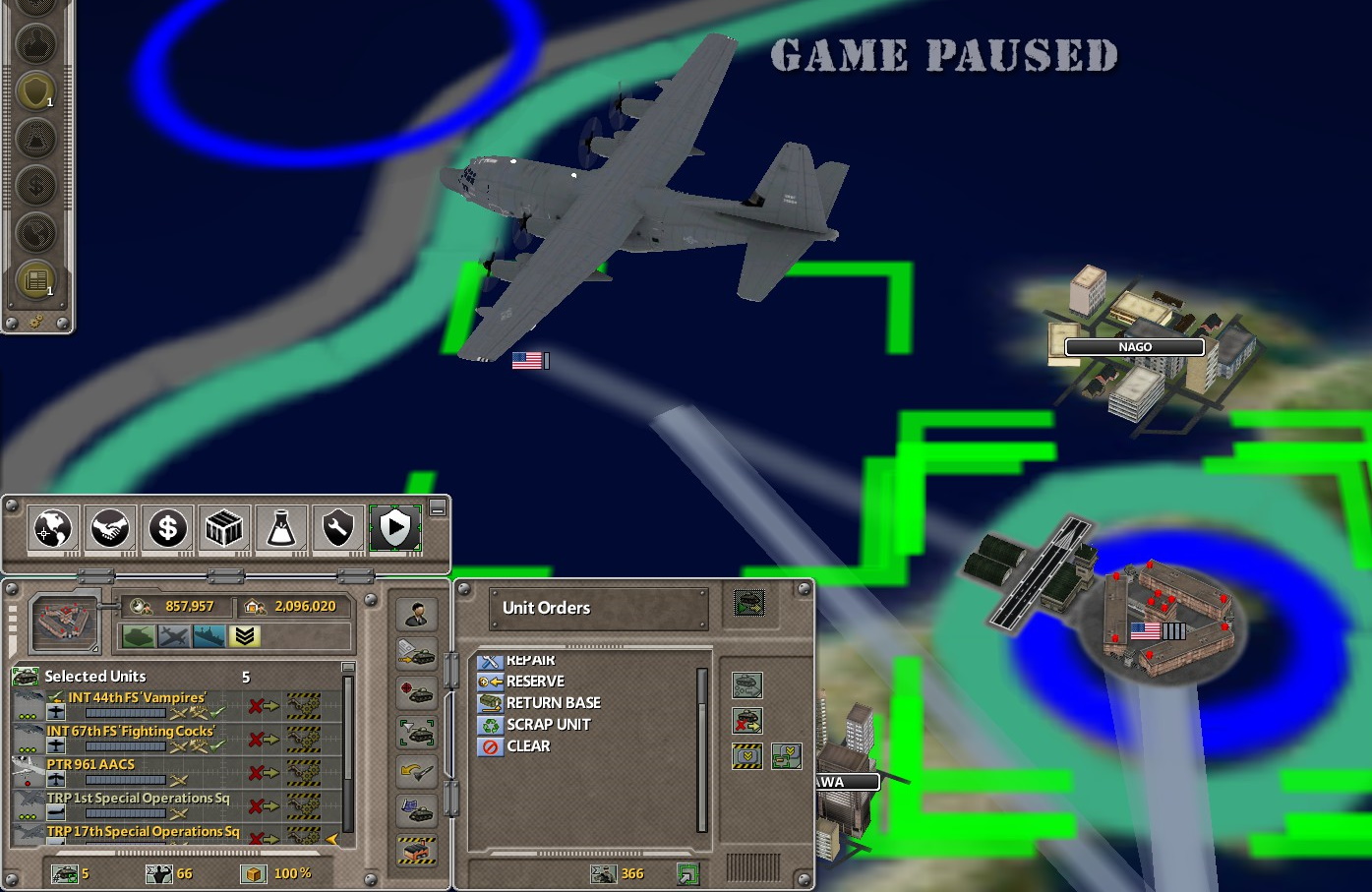 As seen in the picture above, There's a new model for the MC-130. Here are a few more models ready for next update(not all): 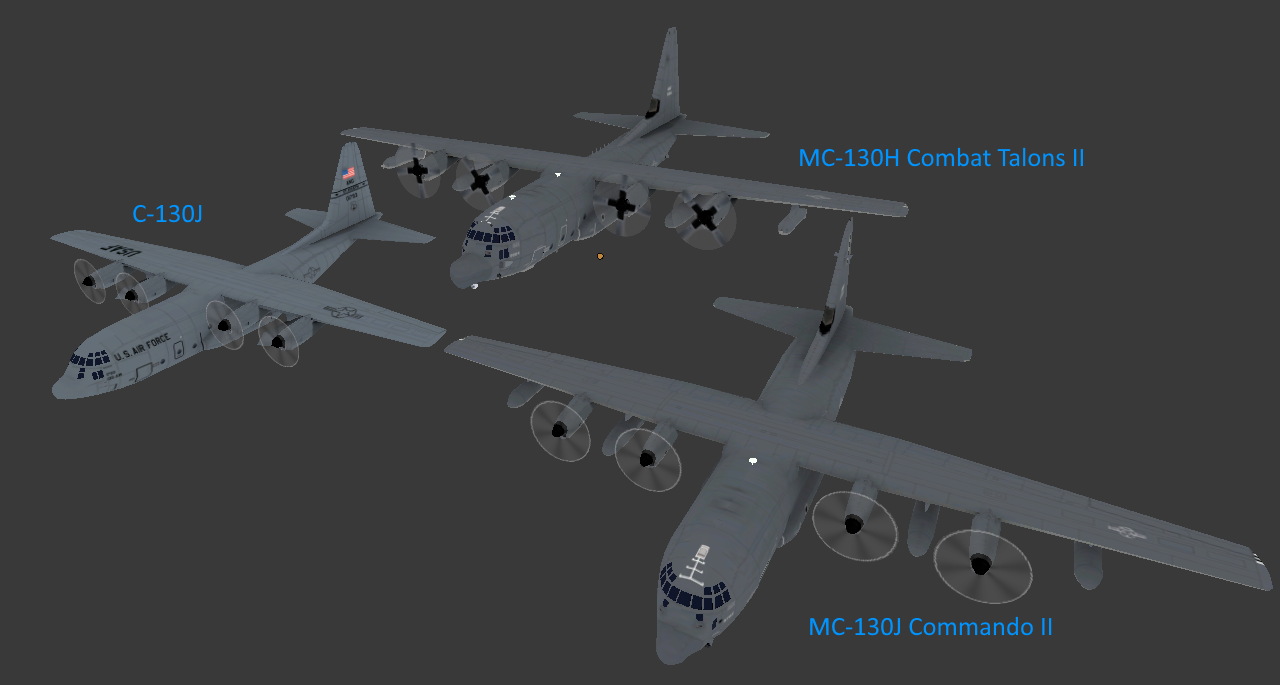 The C-130s and F-35s already have their national textures ready, simply not shown here for visibility's sake.
Every F-35 was given a unique model with his own shape and texture file. The F-35B and F-35C is a good note to end this SITREP and transition tomorrow into the USN/USMC devblog.
Cheers
Top

legionary wrote: ↑
Dec 03 2019
Good day. I installed the mod according to the instructions, but the models are not displayed. What could be the problem?

Hey there, if you installed the mod correctly and replaced every file when asked. (important)
You should see two new sandbox scenario in singleplayer and multiplayer.

The new models will only appear in these 2 starts as sadly, every new model needs to be assigned and recached into the game.

You simply have to drop the files in your main SRU folder, don't drop them somewhere else.

This is unbelievable !! Thanks for your work)
Top

I'll add it to the list. It probably won't make it for the next release though as I already have a lot of other models to finish.

US Navy and USMC. Well wow, where to start with them. Every US Navy ship stats was double-checked to catch and fix any mistakes I could find.
From there, I started to build the US Navy OOB from scratch. The Arleigh Burke is now properly separated into 3 upgrades (Flight I, Flight II, Flight III).
The Ticonderoga goes from the early Ticonderoga with twin-arms to the Ticonderoga VLS to the Ticonderoga with modern radar and electronics.
Every US Carrier Strike Group was recreated with the proper carrier, escort ships, and airwing on it. They were then distributed in the world in their approximative area of operation.

A US player will also have multiple versatile Littoral Combat Ships at his disposition like the stealthy bleeding-edge LCS Freedom with its brand new 3D model.
The US surface fleet is thus now a force deployed around the world not to be trifled with. 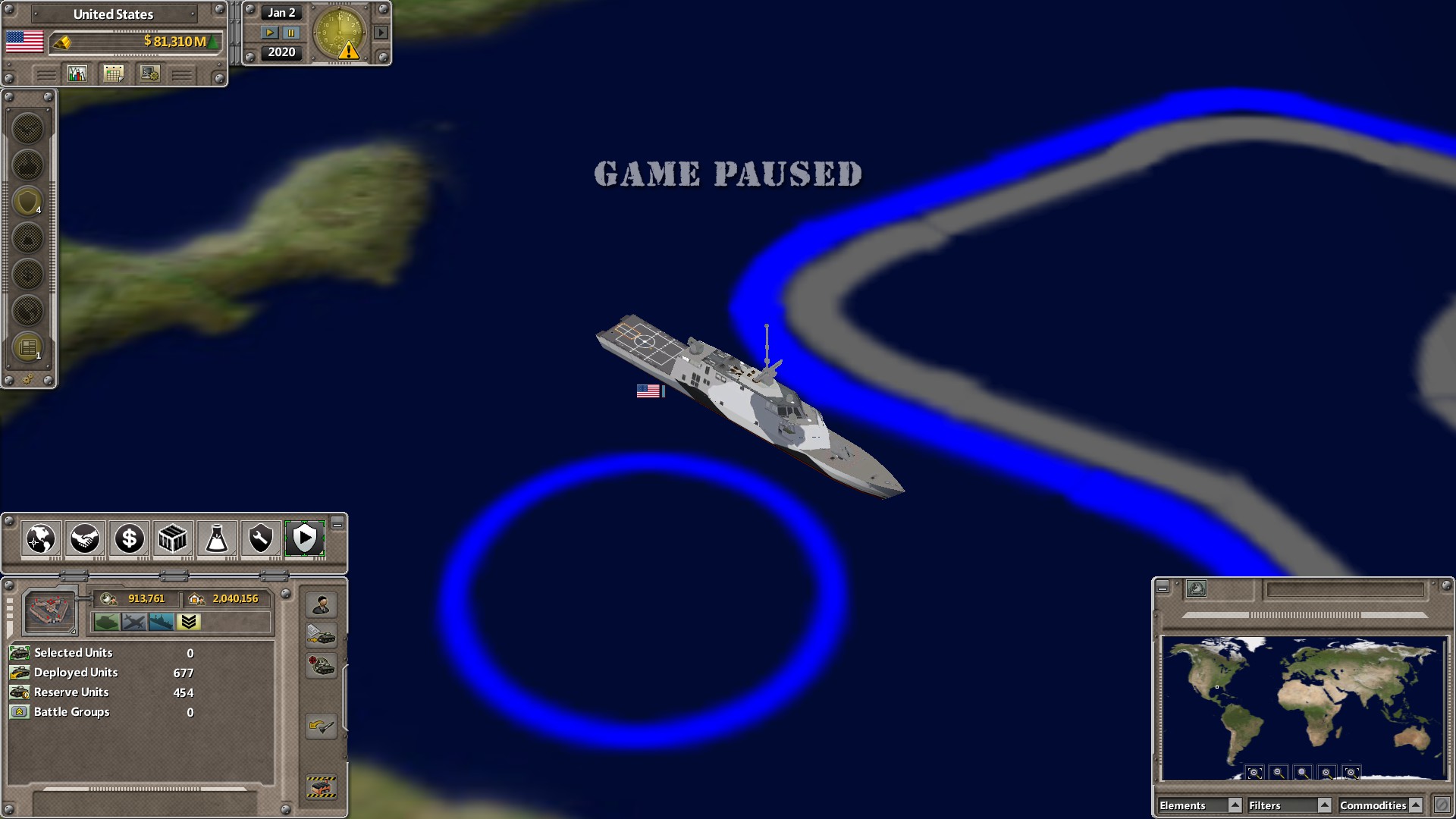 Which leads me to their next strength, the US Navy submarine fleet.
The submarine fleet is a nuclear powered only fleet composed of submarines ranging from the old but reliable Los Angeles class submarine to the deadly Virginia class.
The US Submarine fleet is properly deployed all around the world in every important location and choke point. Someone declaring war on the USA shouldn't expect any respite from the wolfpacks guarding the sea.

USMC
The USMC went through numerous modernization the last few years which will be reflected in-game. The M119 was almost entirely phased out of the Marine Corps for the M777.
The Marines airwing received a few F-35B/C alongside a complete replacement of their CH-46 wings by the brand new MV-22.
Their Abrams is a new unit and model as they use a modernized M1A1 called the M1A1 FEP. The M1A2SEP wasn't the proper unit and the M1A1HA wasn't doing justice to the FEP.
The four USMC ground components are located at MCB Pendleton California, MCB Lejeune North Carolina, MCB Smedley D. Butler Okinawa and the 4th marine division(reserve) near New Orleans.
Overall, the USMC is a combat-hardened leg infantry but capable of becoming a somewhat mechanized infantry when using the AAVP-7(now with a small cargo).

(The 1st Marine Division at MCB Pendleton with the new US Marines model, M1A1FEP and US Special Force model.)
SITREP tomorrow will be about the UK as I know someone who's waiting for it eagerly. (furtively looking at Michael Berg

I'm surprised!! It is impressive what you are doing with the modern world scenario! I want it to come! hehehehehehe, by the way the mistake he had if it was for the update hehehehe thanks for the information, it was already corrected.
Top

Thanks, Chris. It really means a lot coming from one of the creators of this amazing series.

The British Army was remade with the same details as the previously showed nations. The UK military had drastic cuts lately so a British player will have to fully make use of every unit available.
The Armored regiment is now down to 3 Challenger II units/battalions. Tanks that are quite outdated compared to more modern tanks like the Leopard 2A7 or M1A2C. A British player will have to focus on replacing the existing armored units with the upgraded Challenger II Megatron. On the infantry side of thing. The UK doesn't have a lot of Warriors IFVs units but most of the rest of their OOB is composed of either MRAP or FV432 Bulldogs.
The UK can also count on the powerful Royal Marine units alongside the Parachute Regiment, SAS and SBS.

(Parachute Regiment at their barracks in Colchester)

The Royal Air Force has multiple bases all over the country with multiple squadrons of Eurofighter Tranche 2. The Tornado was entirely phased out of service by April 2019 so this venerable plane will no longer be part of the UK starting units. They also have multiple cargo squadrons with planes such as the C-130J and A400M. 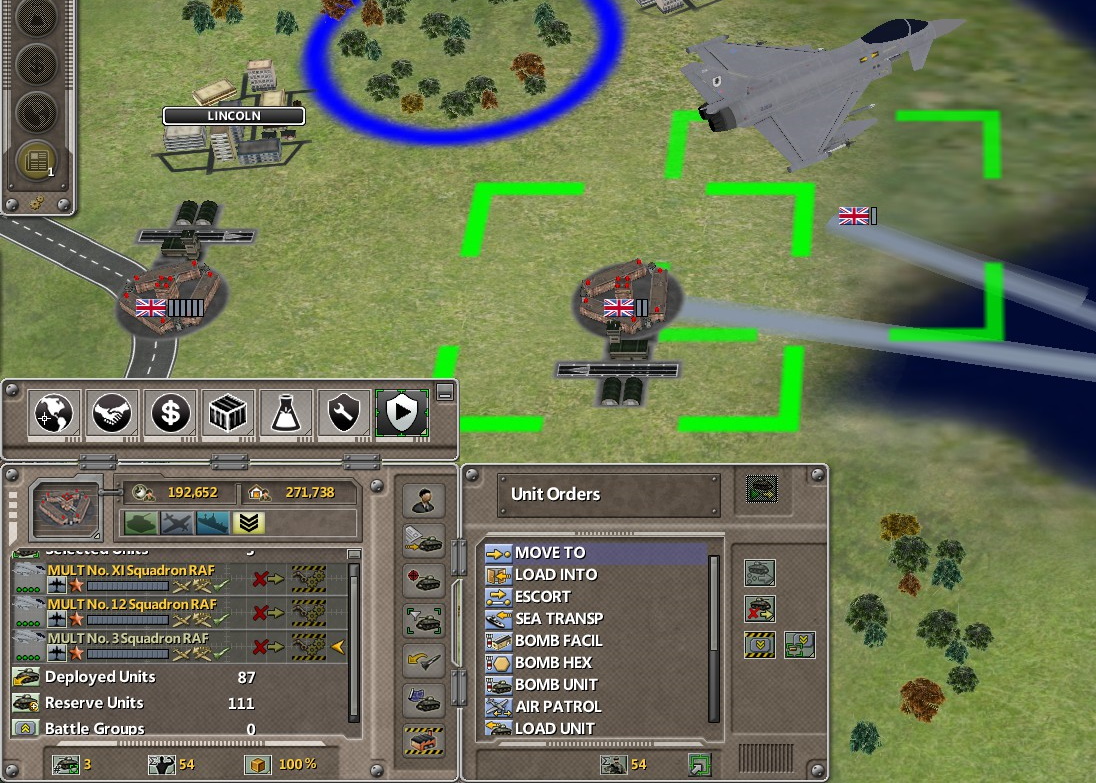 (3 Typhoons at their Homebase, RAF Coningsby)

On to the Royal Navy. The Royal Navy is in a weird situation where their 2 Queen Elizabeth Class are without proper air wings as they only have 1 FAA F-35B squadron operational.
Other than the 2 carriers, the UK has a versatile fleet of Type 45 destroyers, Type 23 frigate, and advanced submarines like the Astute Class. The Royal Navy can also expect help from the two RAF P-8A Poseidon squadrons placed at the north and south of the UK. All of this makes for a nasty combination to defend the British Isles. *drink tea*

Next SITREP will be Monday about France and a few changes related to the map.
Last edited by Cyrus Jackson on Dec 07 2019, edited 1 time in total.
Top

Great upgrades to both USA and UK loving the HMS Prince of Wales model can we expect similar for type 23?
Top

Are there plans to overhaul ABL planes? Right now they are stragegic bombers, which is bizzare, since that's not how lasers work. ABLs should be missile interceptors (attack VS high air and some mid-air).
Top
Post Reply
121 posts