I will try and see what is wrong. It could be something as simple as me making an error with scale or texture names.
Top

Okay the problem should be that I uploaded the name for the P2 Neptune not the P2J Neptune (yes I got both versions but only the J version have been released so far). The P2 Neptune is to use the texture P2_nep_tx.dds. The P2J uses P2J_tx.dds.
Basically rename P2_nep_tx.dds to P2J_tx.dds and it should work
Top

yep that sorted it 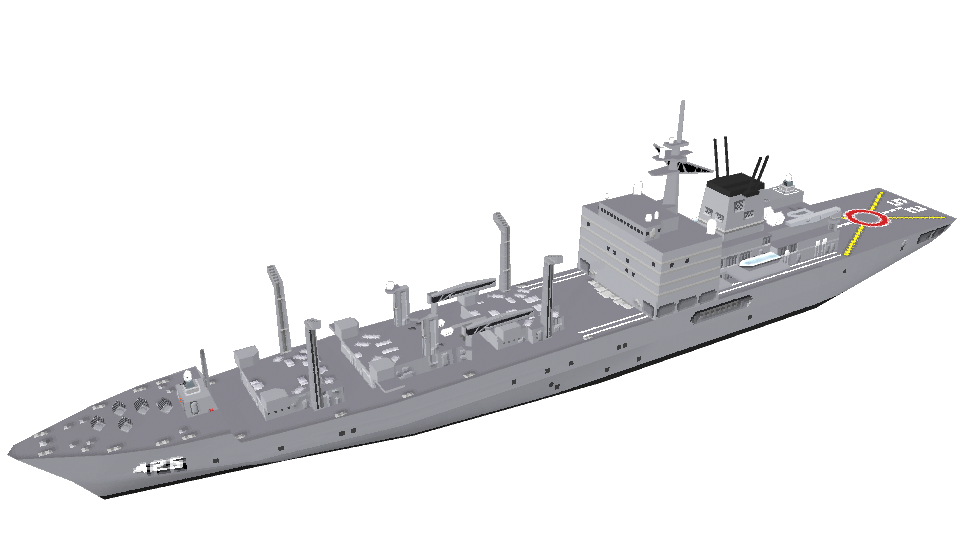 I will see how fast I can get the files converted.
Top

Typical complement is 1 helicopter if any which is probably a bit low for CarrierCapacity when helicopter units are typically 24 strong.

These ships really just are floating storage facilities. They normally do not even carry helicopters and they only have provisions for mounting phalanx CIWS. I am just assuming they would quickly be fitted with them during wartime.
Top

Nerei wrote: ↑
Mar 30 2020
Typical complement is 1 helicopter if any which is probably a bit low for CarrierCapacity when helicopter units are typically 24 strong.

These ships really just are floating storage facilities. They normally do not even carry helicopters and they only have provisions for mounting Phalanx CIWS. I am just assuming they would quickly be fitted with them during wartime.

However, the type 071 does have carrier capacity at least in my DB all amphibious assault ships do sometimes its easier to drop a chopper load of commandoes off that way than risk the ship itself going to shore which in reality probably wouldn't happen anyway!
Top

It is around 40m long from what I remember. For comparison it is around 10m longer on a Shirane. However nearly a 3rd of the Shirane is helideck.

Ships like the Type 071 really highlights part of the problem with the current aircraft system. It can carry helicopters and use them to deploy troops but not nearly enough to warrant a capacity of 1 as that is 18-24 aircraft in most cases (for comparison it carries around 4).
For other ships like destroyers the abstractions work okay. But here there is no way to properly do it.

Okay release time. As always I am on a mac and testing on it is "annoying". There might be bugs as I again as always have very limited ways to test it.

Tanks are made to support revolving turrets but the picnums is set for the game to treat all elements as a single object. Basically turrets are fixed but can be configured to revolve in the picnums file.

All UGBITS should be there but again being on a mac testing is not the easiest task there is.


Also I have made some updates to existing files.
download link
Note: As BG have these updated files and the content of V2.0 the updated files (listed as V2.1) are uploaded separately. V3.0 which BG does not have does not contain any of the V2.0 or V2.1 files and should be valid after the next patch

All the files in V2.1 and V3.0 are also available among the loose files.
Top

So with the current package of models released it is time to plan for the next set.

I have already decided to focus on asiatic surface combatants but I am open to suggestions for other models to make. This can be single models or a general idea (being specific is good though). As long as it is relevant I will consider it (no it does not have to be asiatic warships).

Keep in mind that good reference really speeds up the process of making models. What reference I can find will be a significant determining factor. Usability and relevance of a model is important but being able to find decent material to work with is just as important.
Top

I have a request

Surface combatants of the Royal Navy to add to the great ones you have already done.

I wouldn't be upset if you finished the 747 off either

of course, pick which ones you fancy

also what about this

The Type 23 and 747 is the most obvious ones there simply due to them already being as far along as they are. The Type 22 is still in the modelling stage.

Also I have long since gathered reference for the Type 26. It is not perfect but it is serviceable.

Likewise I sourced all I needed for the L-ATV around the time I made the Cougar 6X6 MRAP. That is literally years ago. 2,75 to be specific.
Making some MRAPs and possibly even a technical might be a good idea. Maybe even a gun-truck or larger "heavy" technical based on flatbed truck. Technicals might be good for poorer countries and if we want to be realistic MRAP's would be good to have as low cost, fast production vehicles. Tanks, IFV's and the like really should take longer to manufacture and be harder to replace in a high casualty, high intensity conflict.
With a better system for irregular combatants gun-truck style vehicles could also be fairly important.
Top

yeah, I knew about the type 23 and 747 thought it might help you finish a few models you have half done I wasn't aware of the Type 22 though sounds good!
Top
Post Reply
1426 posts