Should probably need changed to a 21st century aircraft tech (It only has 1 required tech, the other slot is blank)

Edit: The aircraft had its first-flight in 2009 not 2012, and was in service for 2013, so it's actual date is a little off too.
Also there are aircraft that use the tech 'Modern Aircraft II' from the 1980s that are 21st century for China as well, much of their 21st century aircraft is unlocked in the 70s and 80s for some reason. 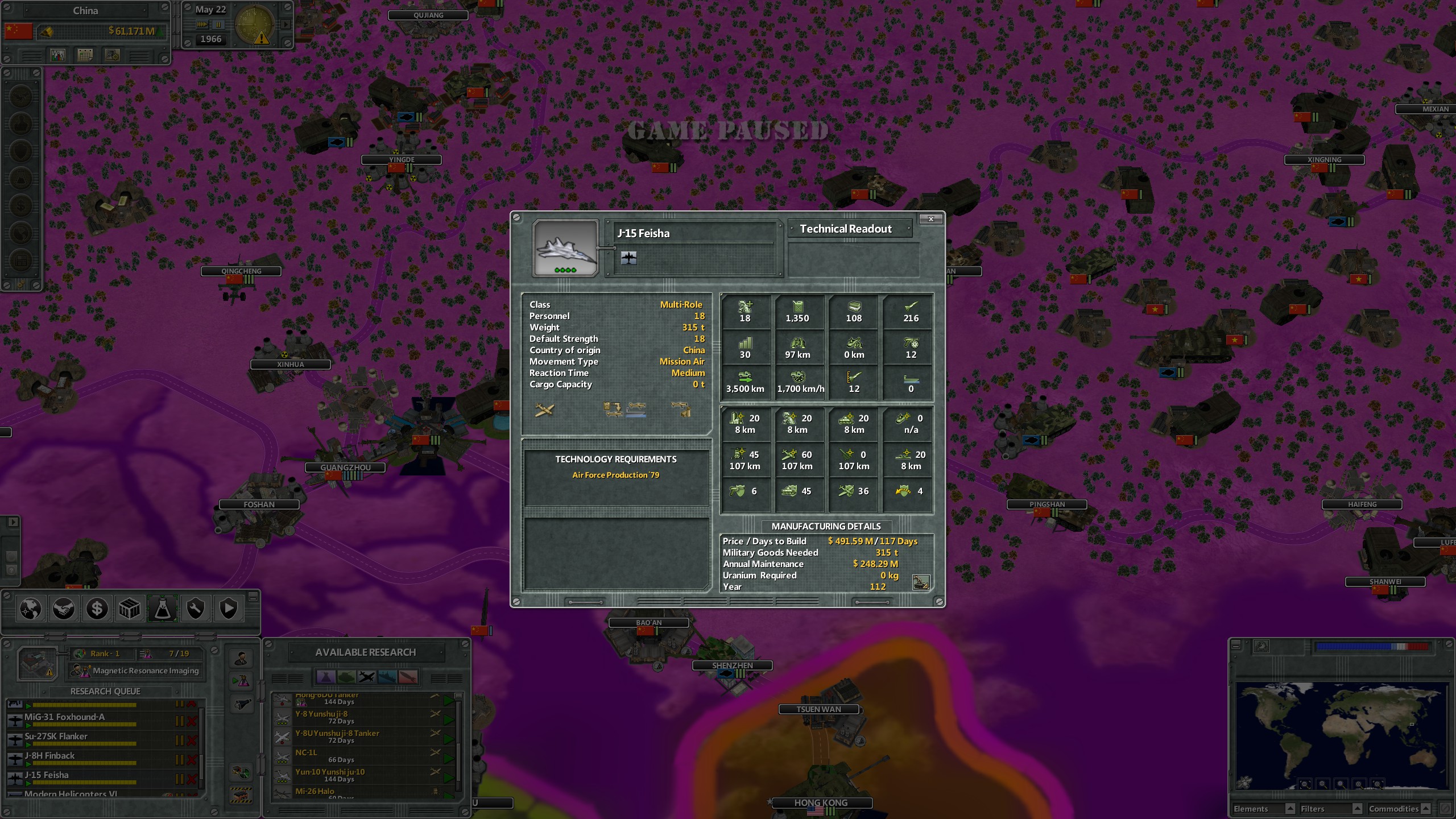 Since I have added this aircraft, I can only assure you that nothing is wrong with it's tech reqs.
J-15 is not a stealth aircraft and is not superior to F-35.
J-15 is 4th generation fighter, not the 5th generation fighter.
J-15 is based on the Su-33 which is fruit of '80s tech.
The "problem" is that China lagged in aircraft techs untill recently, so their newest aircrafts are based on techs that are outdated on the Weast and in Russia.
If China did not lagged in aircraft techs, they coul'd easily build all these models in '80s just like western equivalents were built. And just like players can do in the game.
Please teach AI to liberate and colonize instead of only annexing!
Top

I tend to agree with Zuikaku. The J-15 really is not a state of the art aircraft. It really is largely something from the 1980's.
Typical missile armament is also not that much beyond that point as long as long as we do not include equipment added later like the PL-15.

The stats are also for the most part not too far from what you find in superiority focused multirole fighters of the 1980's. It is in the high end yes but except for the mid air attack which is borderline amazing for the 1980's I would not say it stands out that much. For the most par it feels like a slightly better Su-35 which is a 1988 aircraft.


As for it being better than the F-35 that really depends on what you are focusing on.
The F-35's belong to the group of multirole fighters with good ground attack and abysmal air attack. Yes the J-15 does better than the F-35 in air attack (ignoring range) but that is not really a relevant comparison in this case.
Yes we can make that comparison but we can also compare the F-35's to the superiority focused US multirole F9F-6 Cougar from 1954 and except for a point in mid air attack they are basically identical (air attack range is different naturally). Likewise when comparing soft, hard, fort and close attack strength of a 1951 F3H-2 Demon to the J-15 the Demon wins in all but close.

Basically depending on where the stats of a multirole is focused there will be aircraft 50 years old or older that can match it as long as it has stats focused in a different area. My assumption would be that BG is representing all aircraft in a unit to be flying with a specific payload focused on either ground attack or air superiority.
Top

I know it's based on an older model, but it doesn't even require a unit design to be researched (A game mechanic that seems almost explicitly limited to the WW2 era where you can unlock like 16 different spitfires, and then some US missiles), it just throws it at you really early on, not to mention it's easy to be miles ahead in tech so that that you can get this in the 60s like I did in the cold-war start (And that issue only gets worse the earlier you start). Surely it needs to require a unit be researched first or something, like so many WW2 era planes do.

Given the relative realism in designs across much of the game pre-2005, it seems odd to give them this tech so fast just because it's based on that tech. If the chinese didn't develop it until the 21st century, then surely it should require a 21st century aircraft tech and just happen to not be particularly good? There's no meaningful way to be so far behind as China that you get this within 30 years of its intended date, as I showed you can obtain it in the 1960s due to tech advancing so fast.

Now I know some old aircraft are still hilariously OP, e.g. anything in Strategic Bomber with the USA region-code basically, or the british SR-45 princess which can't be beaten for decades, and certain anti-sub patrol planes in the 40s and early 50s, but surely this should at least require some designs to be unlocked, it requires one tech, no designs at all, and ends up unlocking 50 years early. The unit-designs-leading-to-unit-designs seems to be abandoned in most of Supreme Ruler, only rearing its head in select places (aka WW2) but it seems logical that this plane requires designs at the very least, because even with the slow research time of aircraft tech, a semi-competent china will still be miles ahead.

Maybe it's just my interpretation of the tech system, but it seems to me that AirForceProduction '79 should be indicative of what the country could build in and around 1979, not what they can build in 50 years time because that was when their tech was historically on-par with AFP'79
Top

And do you really suggest russian aircraft shoul'd be prereq for chinese aircraft?

You can not just lock out some plane from being researched earlier just because it was historically researched later. What about other planes? You can build F-35 in the '70s if you push research too hard.
This is not about unit designs but because both human and AIs do not get any serious penalties for spawning 10s of research centers. Research shoul'd be much costlier and research capacity shoul'd be tied to population and GDP.
Also, research centers shoul'd be very hard to capture (95% delotion chance upon capturing).
Please teach AI to liberate and colonize instead of only annexing!
Top

I feel like it's not pushing research hard but logically, the AI will gladly create a dozen research centers and challenge you to jump miles ahead too, it just can't do it as efficiently (And the AI severely stops caring for military designs when not at war, which leads to things like the USSR having modern ship techs but having never built a single submarine design since the Whiskey Sub). Saying people push research too hard is like saying players are bad for trying to be good at the game, if you watch the USA or Soviet Union or even France and Britain, they will gladly just keep piling on research centers without even conquering, so it is the system itself that buckles under the logical progression, not buckling to players going too far.
Obviously AI building research centers is relatively new, I think it was added like 2 years back which in SR terms is new, but it is a part of the modern game; they will just keep building research centers.
And it's not like I went Kuwait and moaned that I can't afford to run 18 research centers, as a big nation I managed to afford that scale of research, just as the AI does (though the AI does borrow money liberally if allowed)
As for russian tech being necessary for chinese tech, well to me it sounds like if the Chinese had access to it, it would be something they can research as a design for themselves, alternatively some kind of in-game scripted trade-offer when the russians get it, just like how the USA is scripted to offer sea transit to britain in early 1936.

F-35s could be built in the 70s true but they require tech relative to their historical timeframe. I think the current approach of the tech system is just a bit confusing, it's odd that we say "well the 2012 plane was using 70s tech, therefore you can just get it with 70s tech" rather than "with the 2012 aircraft tech that country had, this is what they could make, and it's weak compared to what many others can do". I think maybe I perceive a date-based tech like "Air Force Production '79" as more saying "Access to the designs this country had by / around 1979", in which the designs would be dictated by what they had access to at the time.
Top

It is not about when some plane is being built but which tech do it require. You seems not to fully understand that "modern" chinese designs are in most cases (not all) something that western nations had in '80s. So, yes, it is a new plane but it is not the high tech design, it is simply Chiese trying to catch up with the rest of the world. So if they build J-15 in 2019 that does not mean it requires techs of 2019. and what about iranian planes then? According to You, their copies of F-5 needs the same techs as F-35 only because they are being produced/introduced at the same time.

And AI also needs some tweaking regarding research and research centers.
Please teach AI to liberate and colonize instead of only annexing!
Top

Well agree to disagree on the design I guess, I think we both see the meaning of the tech to be different things.

And frankly the AI still cannot even build supply so it ends up with zero-supply wars in Africa and Russia which it can never resolve, so it would be better to assume we will never have a better AI and that we have to build research centers to counter their constant building of them too. 20 research slots is usually the golden number in my experience, any country that can afford that stays at the top as the game rarely offers up more options than that in terms of good designs to research on top of actual tech to research. The game's manual says spare slots actually give minor buffs to research on other research centers that are actually researching, but I'm unaware of how good that is and I imagine it's negligible.
Top

Having done a quick check, I agree with Zuikaku that we are consistent with our design on this unit.

We usually use service date, so 2012 is also consistent.

Sorry, this one we're going to leave as is.
Chris Latour
BattleGoat Studios
chris@battlegoat.com
Top

The game has a j-11b with technology 1679(Modern Aircraft III techlevel 97). j-15 is equal in its technical level to j-11B than to su-33. Technology 1679 would be preferable for the J-15, also the combat characteristics of the j-15 are noticeably superior to the su-33 in the game.
Top

In theory, they are superior due to better avionics and electronics 8and guided weapons they use. In practice... who knows, it is term of military secret.
Please teach AI to liberate and colonize instead of only annexing!
Top
Post Reply
12 posts • Page 1 of 1