More progress on the Leopard 2A6 v 2.0. This time it is together with the old one. 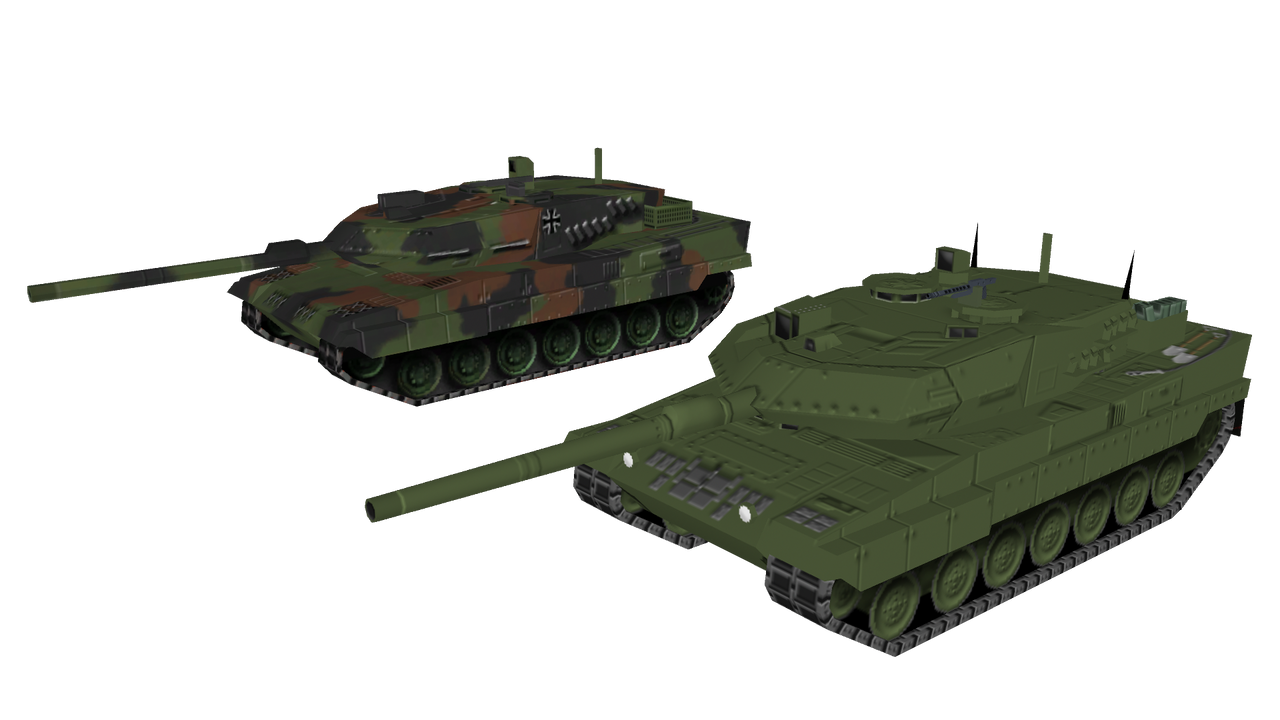 It still need some work before it is ready. It is rendered with a point light source as it does not yet have any shading built into the texture map.

This comparison also shows the difference in detail. I will probably list some comparisons once it is done.
This is also why no matter if I have the same time I did when I had the most the number of models I make will be significantly lower. They simply take much longer to make.
Top 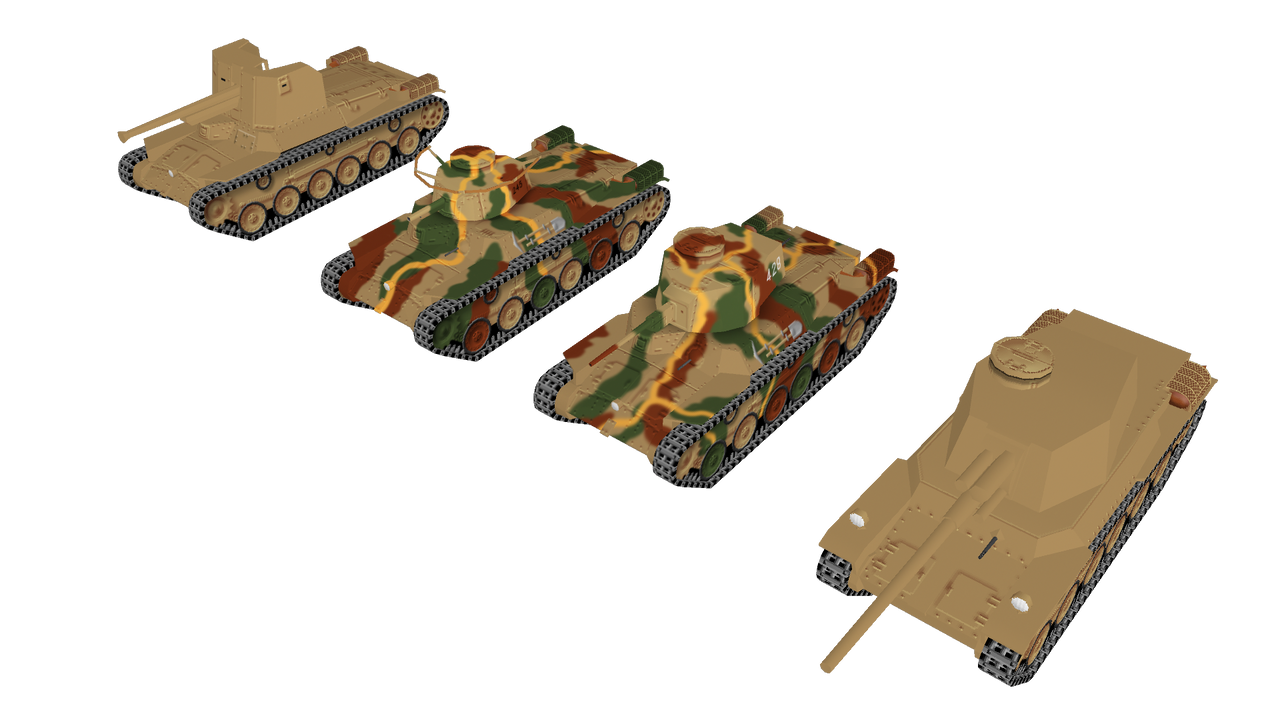 The Type 97 Chi-Ha and Type 97 Chi-Ha Shinhoto have full shading and just need a generic green version. The Type 1 Ho-Ni I needs a bit more work although the chassis is directly ripped from the Chi-Ha. The Type 3 Chi-Nu is far from done.

The good thing about Japanese medium armour from this period is that there is a whole lot of recurring elements.
Basically except for prototypes and the like almost everything is derived from the Type 97 Chi-ha or Type 3 Chi-nu.

The Chi-ha can be turned into a Type 1 Ho-ni (I and II), Type 4 Ho-Ro, Type 2 Ho-I, Chi-ha Shinhoto (as shown above) and 120mm Chi-Ha without too much effort and I might have forgotten some prototypes.
Also it is pretty darn close to the Type 1 Chi-He in appearance to the point where converting it pretty much is just adjusting a few texture elements on a Chi-Ha Shinhoto.

Together with the Type 3 Chi-Nu (which is the base for the Type 3 Ho-Ni III) and an upcoming Type 89 I-Go it basically should cover all Japanese medium armour and a large number of derivative vehicles.

The Type 3 Chi-Nu is also a good starting point for the Type 4 Chi-To as it is largely similar visually except for a lengthened chassis with 7 roadwheels instead of 6.
Chances are though I would go for a Type 5 Chi-Ri instead as it is visually more distinct Chances are however that I can take texture elements from the Type 3 Chi-Nu as there is still a good number of similarities. The front is largely identical and given that the Type 3 Chi-Nu model is the one with the improved main cannon large parts of the turret can probably be recycled too.

Light tanks, tankettes and armoured cars are more uniques though so once I get to those chances are it will be a lot more work.


Also both the updated Leopard 2A6 and Merkava IVm are largely done. The old Leopard 2A6 is there for comparison. 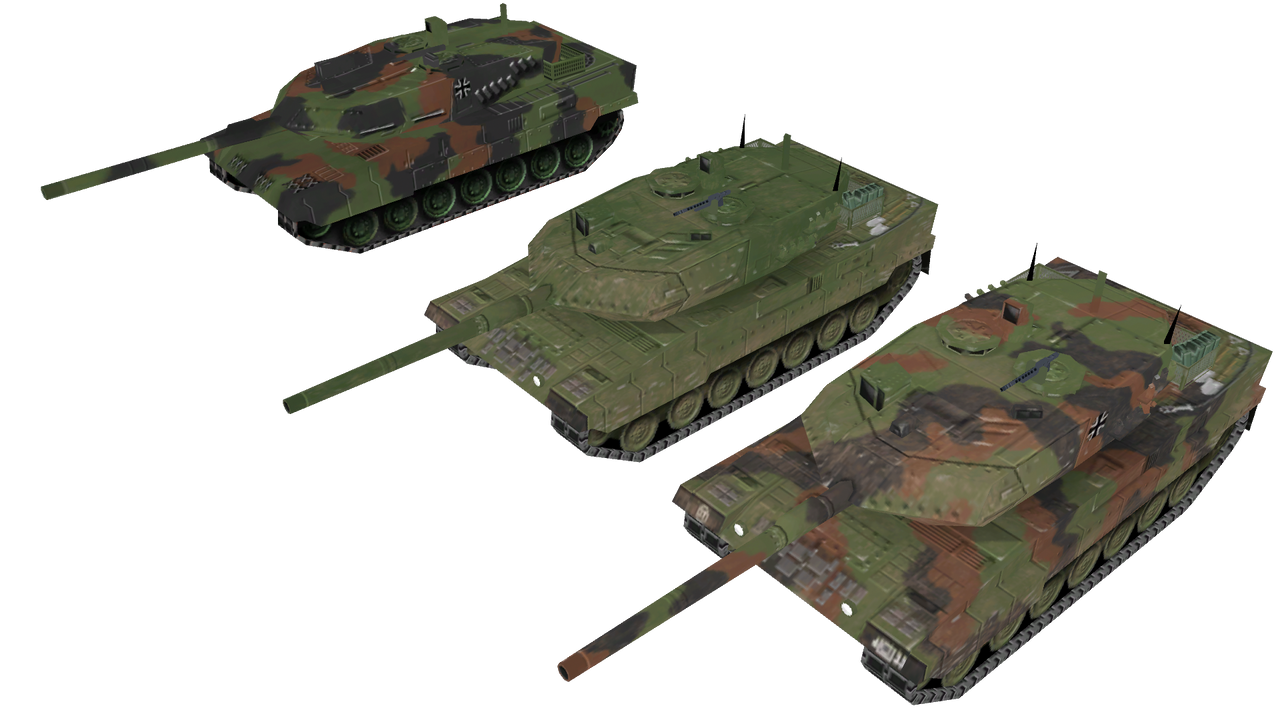 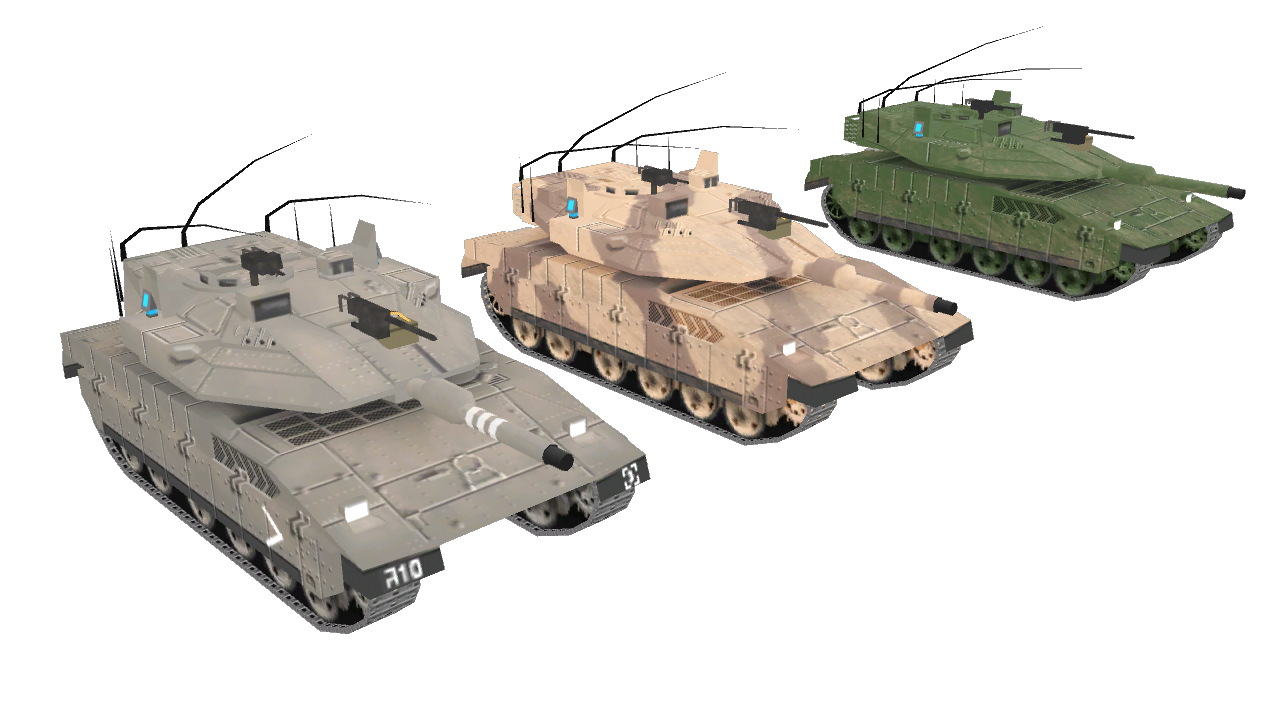 The ZTZ-99A and ZTZ-96B are also more or less ready except for dirt which I have not decided yet if they get or not. 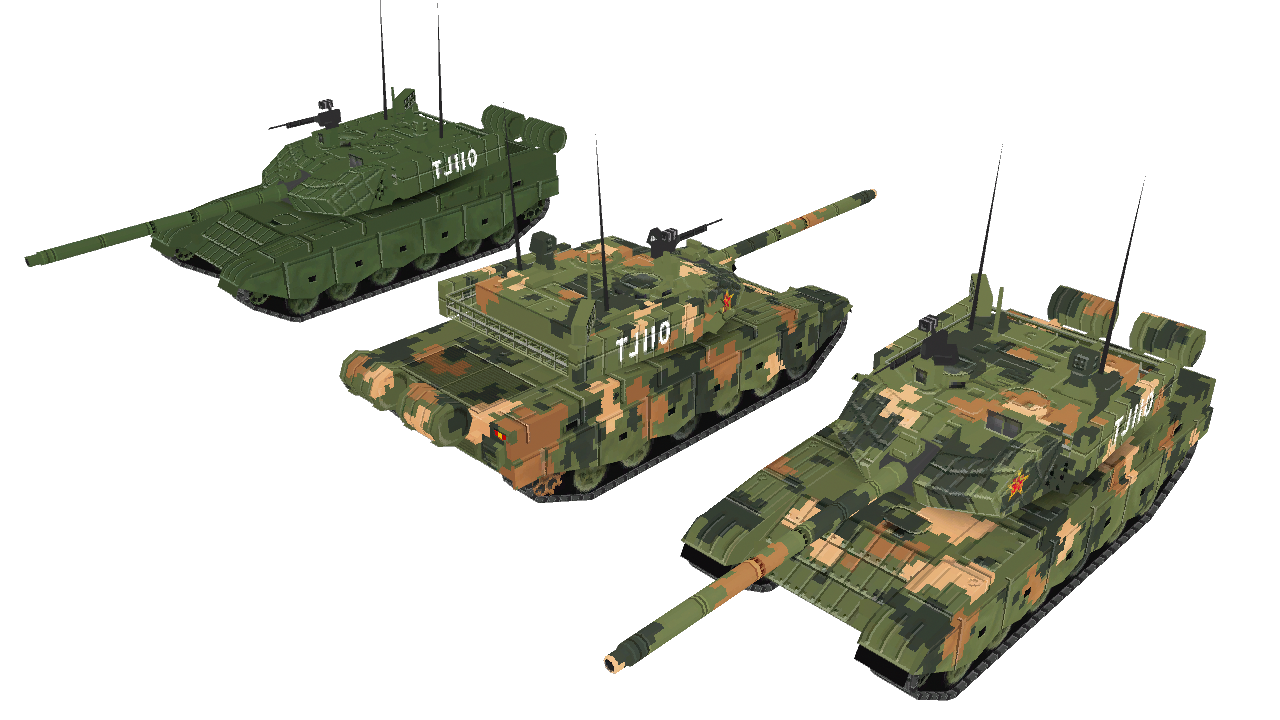 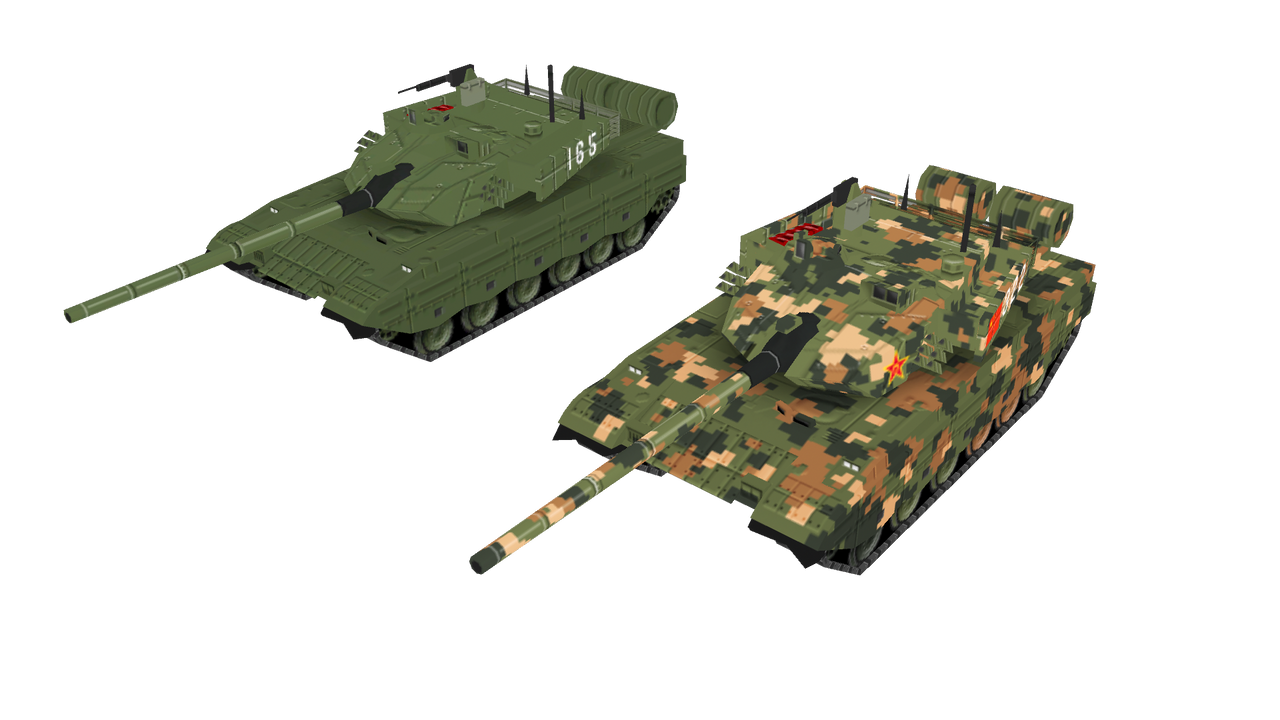 Likewise this PLAGF ZBL-09 just needs a generic green version and again maybe also some dirt to be ready which should not be too hard. 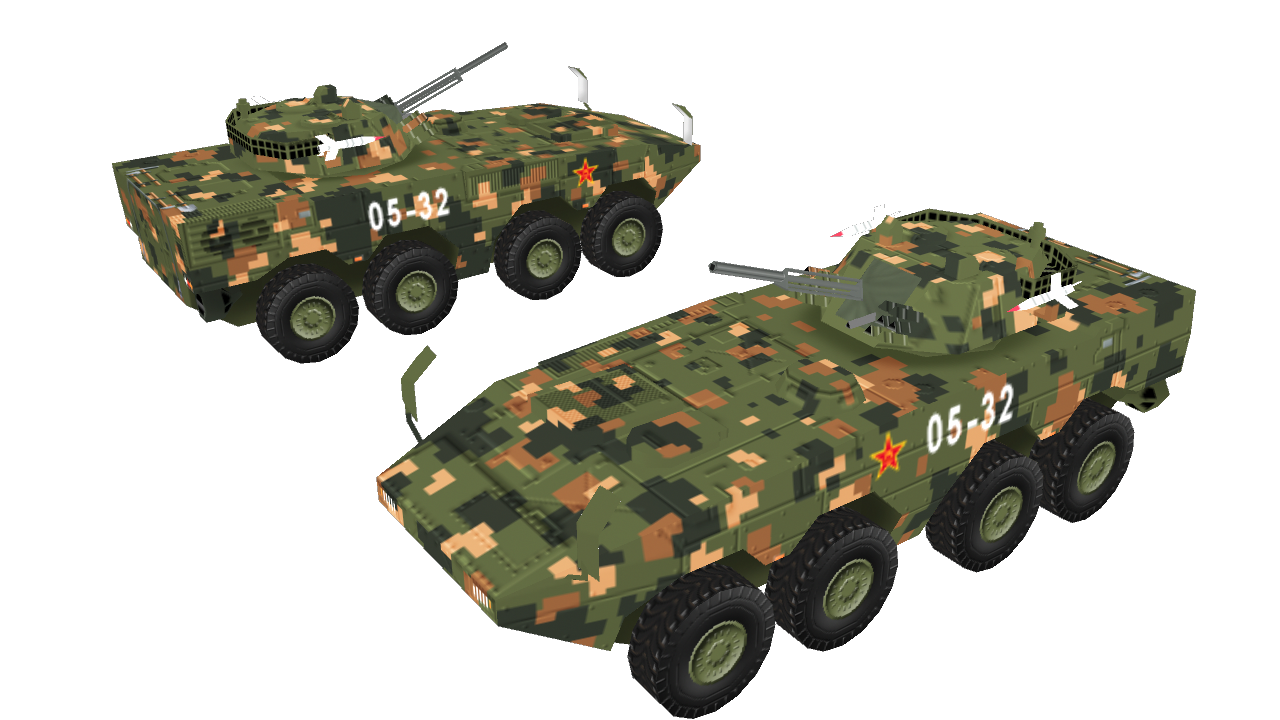 Yes the basket will be transparent but I accidentally forgot to set it to render the texture with transparency.

It will also have a ZTL-11 Friend in the form of a ZTL-11 at some point. It is however not nearly as far along. In general the Snow leopard chassis can be converted into a lot of different vehicles and the Texture map is designed to allow for such conversions. 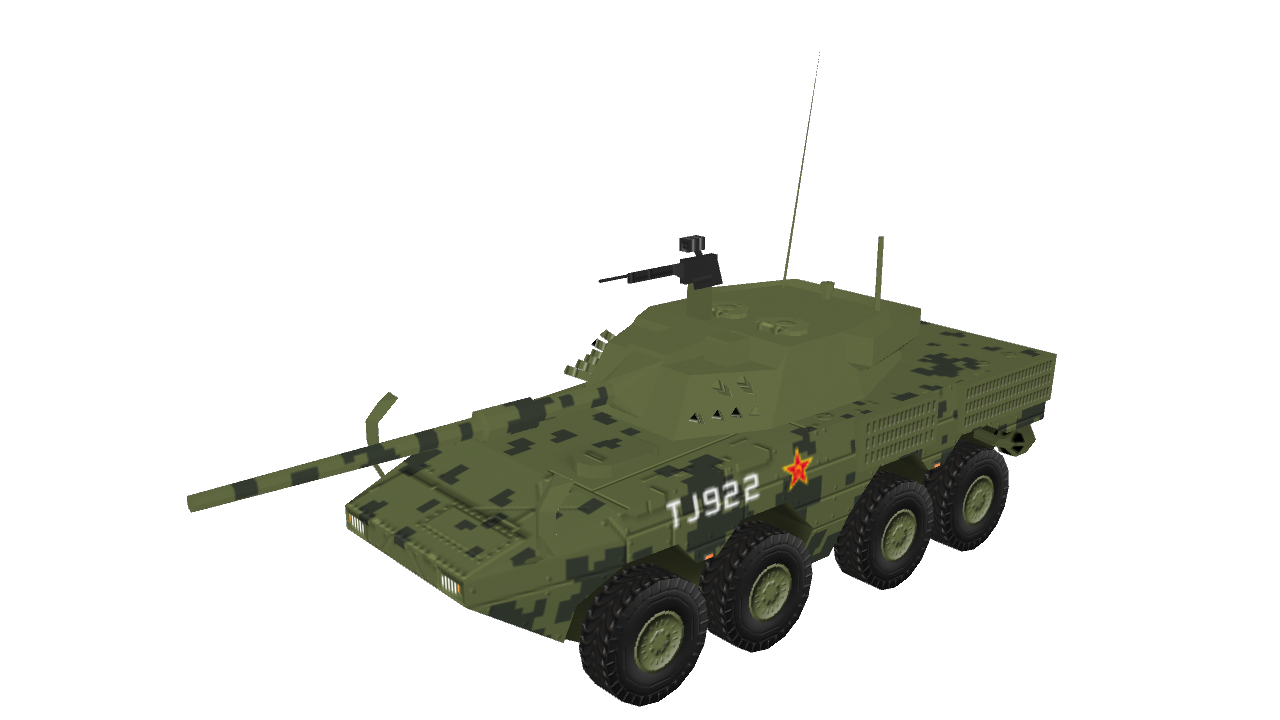 i just noticed that your Spruance Class Destroyer model really small, like the size of a patrol craft.
Here is a screenshot of it beside the Oliver Perry Class Frigate. 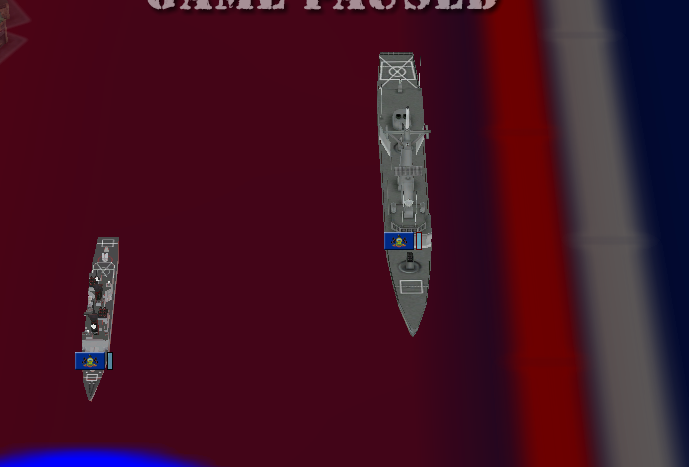 Last time I touched the Spruance (mesh 1796) was actually to adjust that issue. That was back in January as part of a quick fixpack to solve a problem with some missing meshes and textures in a patch. I assume the default.picnums with the changes have been overridden at some point with one that uses the old scale.

You can replace entry 1796 in default picnums with this one

You can also just replace the last number (0.2) with 0.35 as that is what scale the mesh should be at.

The model have been re-exported by BG though so the scale might have changed.
The good thing is that you do not need to recache to adjust default.picnums.
You can use a save where the model is lined up next to some other models you want to scale it against and adjust the scale value and just reload that save to see the change.
Top

thanks for the info
Top

I have tried to poke BG in the unit errata thread about this so hopefully it will be fixed in the next patch.

Also quick question. Is there any relevance to making models such as a gun-truck or technical? I have not started on any of them yet and it will probably not happen right away in any case as modern PRC and cold war Japan (yes seriously I have quite a few models to do there still) still have a lot of work left. I just thought I would check as irregular forces are not something the game does particularly well.
Top

I got a bit angry at my old Type 90 Kyū-maru model so I ended up redoing parts of it. It is less complete rework than the Leopard 2A6. The mesh is largely the same just with more props added or adjusted. The camouflage pattern (and by extension the UV map) is also more or less the same. The tracks and wheels are largely unedited. 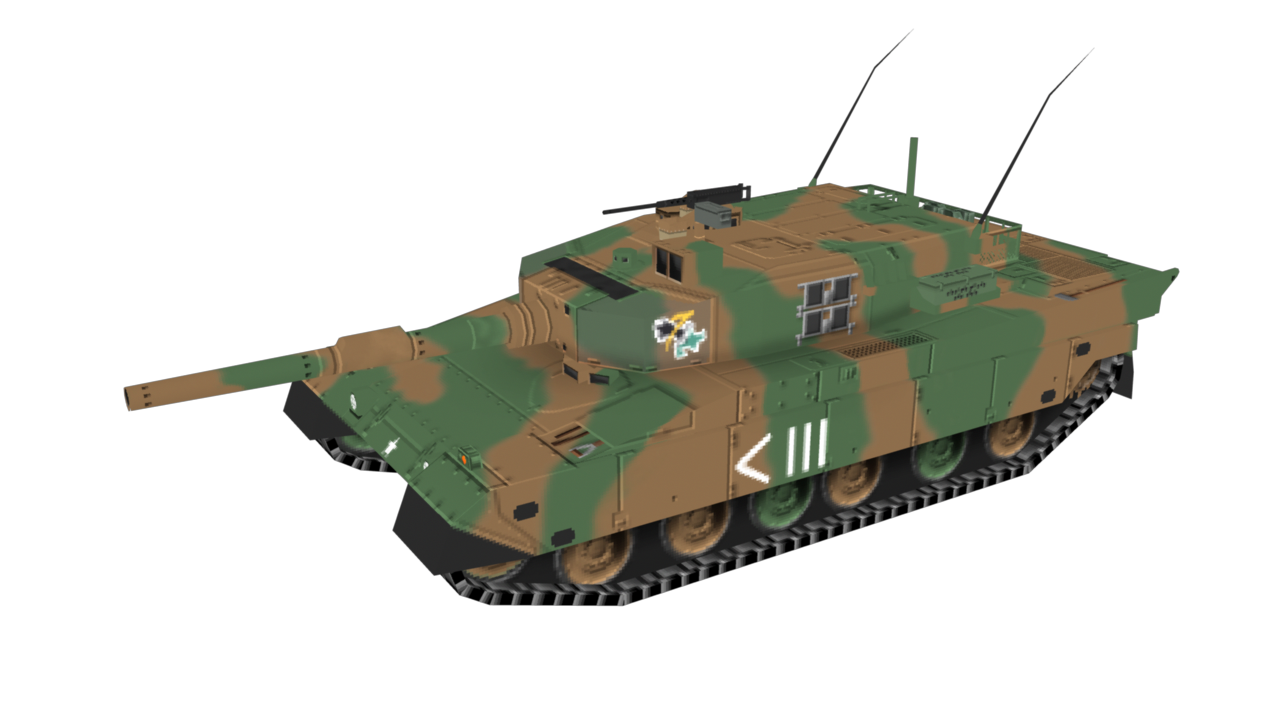 The cannon is a slightly modified version of the Rheinmetal 120mm L44 I made for the Leopard 2A4 and the M2 is taken from the Type 75 HSP with parts from the Type 10 Hitomaru.

No shading done yet.
Top

This is the updated Type 90 Kyū-maru more or less done. This is with proper shading rendered with just ambient lighting and without fancy texture effects so it should be fairly close to how it will look in-game. 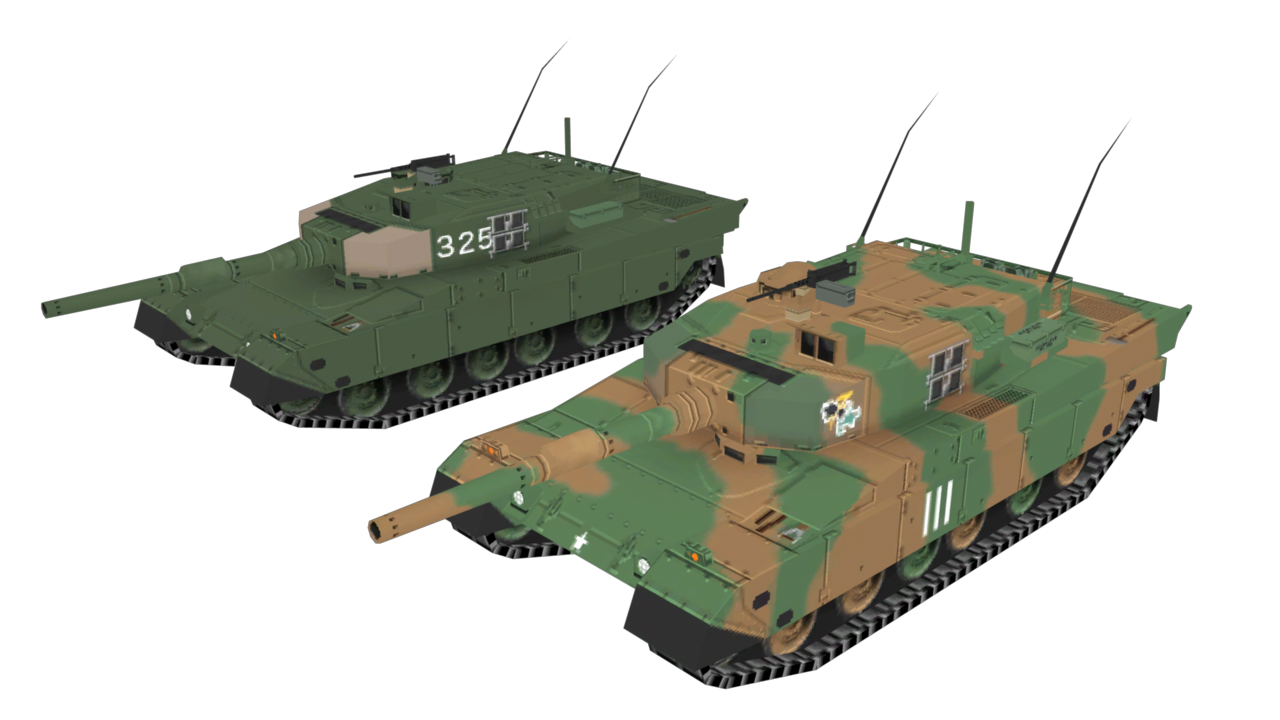 I am still aiming to have something ready by the end of October. Right now I am mainly trying to finish off some models that are fairly far along. That is when I do not get annoyed by the old Kyū-maru model.
Top

Currently the models that are ready for conversion are:

As mentioned the KC-767 is just a minor UV update and the addition of an Italian (H) region group texture. Likewise the Hitomaru is just me adding the front turnlights that I for some reason had forgotten. There are no mesh or UV updates for it.

The Type 60 MAT armed APC is really just the regular Type 60 APC fitted with a couple of Type 64 MAT ATGM. I did also replace a few parts with better ones and strip some invisible faces. The change was quite easy to push back to the old Type 60 APC so I did that also which is why the regular Type 6+ APC is listed.

I will probably do something a bit similar with the Type 74 MBT as I want to make a Type 74G MBT at some point and stripping it down to create an early model Type 74 MBT (which yes I already have made). The problem is I cannot properly upgrade the regular Type 74 to G standard as that includes armoured skirts as the most visible difference and fitting that on the texture map will take a good deal of reworking.
Top

I have trimmed the Type 73 heavy truck with M901 MIM104 Patriot PAC3 Launch Station (yes short name) mesh a bit. This is really just optimisation. From a visual standpoint little should be changed.

Looking at the Type 45 Destroyer it is probably serviceable as is so I see little reason not including it.

Also except for shading the Type 60 Tank destroyer is largely done so it should make it also. 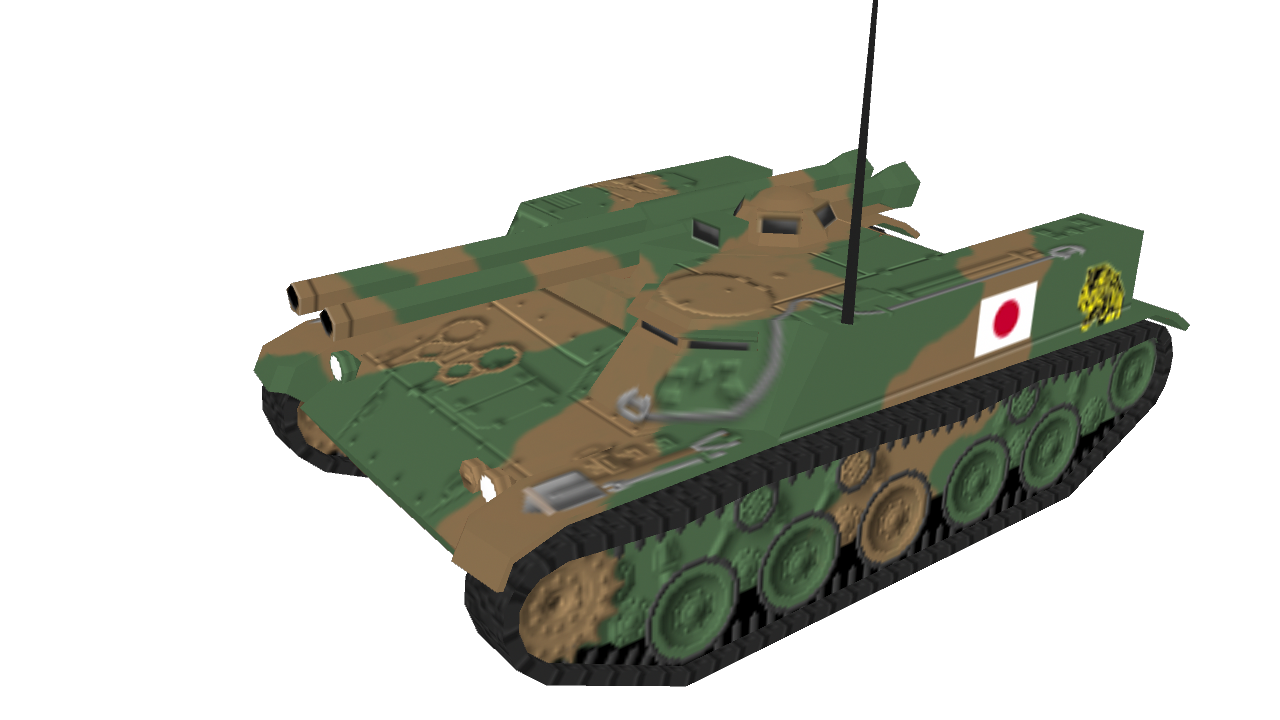 It should be possible to guess nationality.

I might end up pushing release a day or two to see if I can get the type 75 HSP included also. It is mostly done except for shading and some details mainly on the turret.
Top

The Type 75 HSP is done meaning that all that remains now is to convert the files and do a bit of testing which should hopefully not take too long. 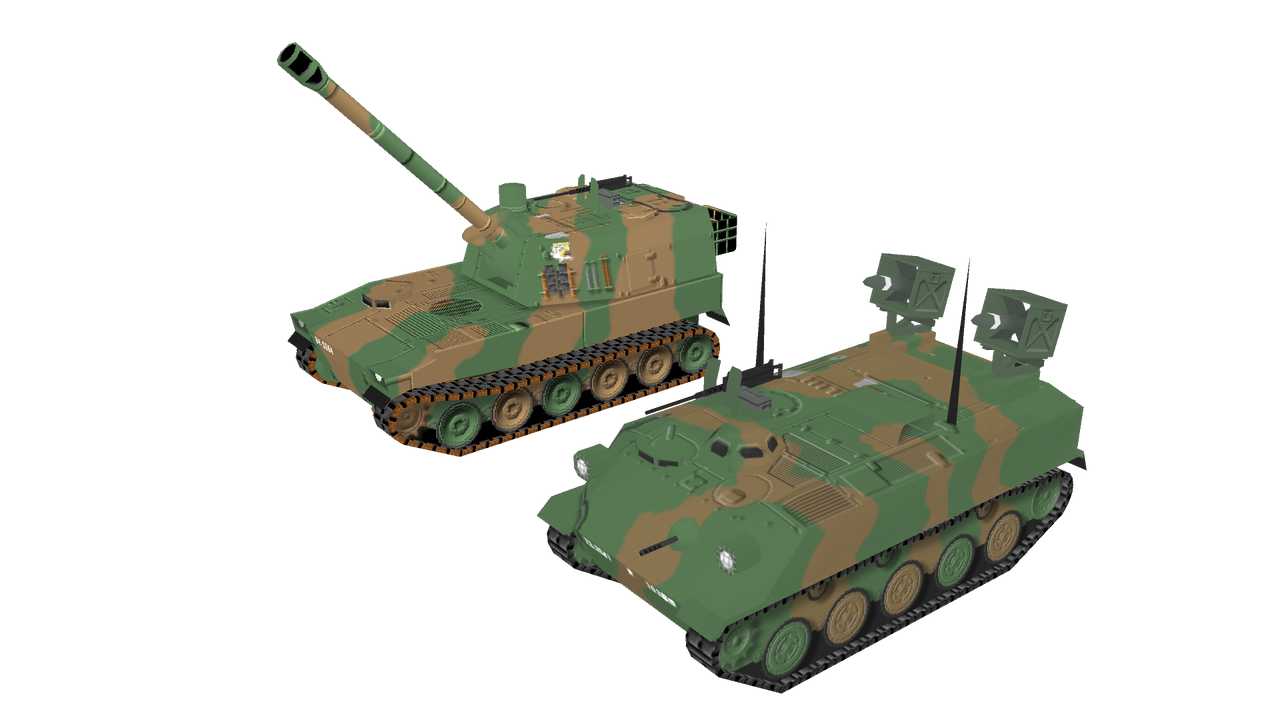 edit: and I just noticed the front MG needs a bit of colour updating. That should luckily not be too hard.
Top

All art assets are done as are the control files. This time however I will be testing it to ensure there is at-east somewhat basic functionality.

Everything should be done soon. In the meantime here is a collage of screenshots. 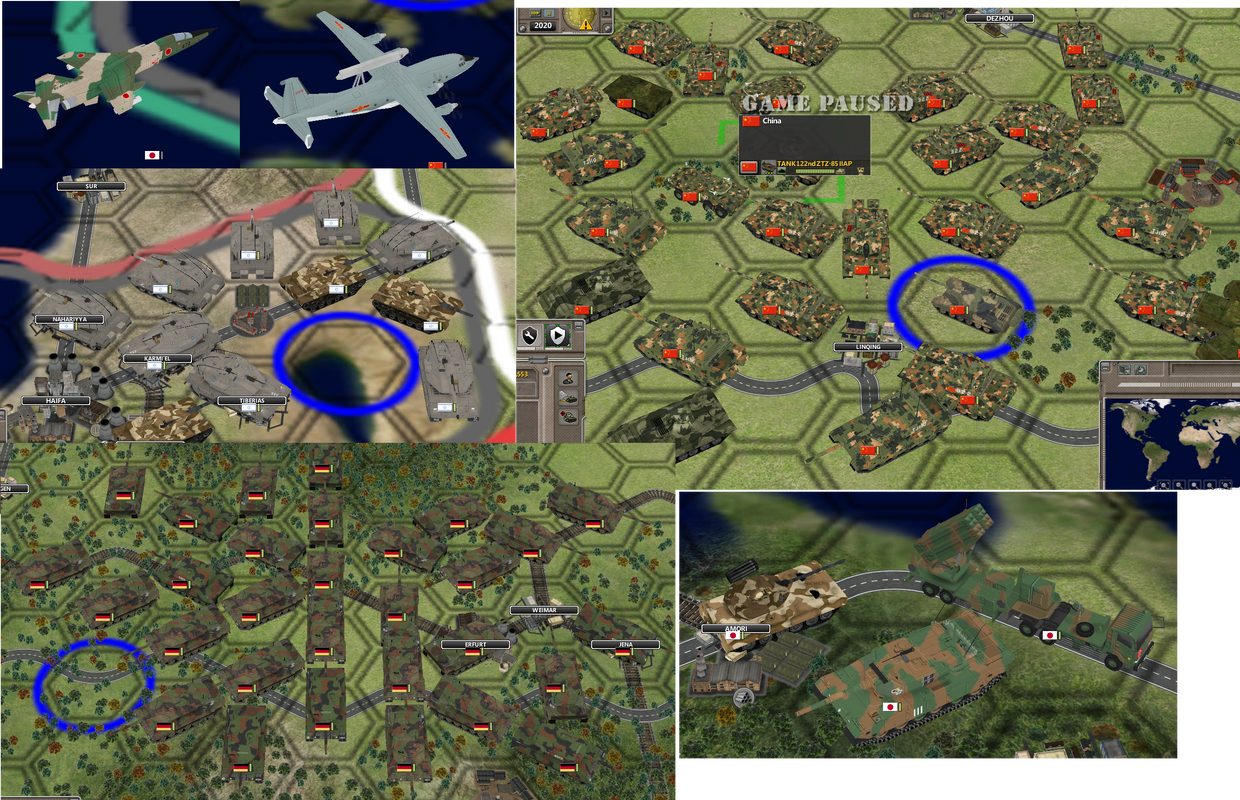