Are there plans for any future updates? I still see a few glaring problems.

With the AI:
* Many countries (for some unknown reason, I suppose just some kind of algorithm) lose lots of land while having huge armies in reserve. For example in one of my games in cold war period West Germany conquered Ukraine colony and into Russia, while me, being Russian ally, saw Russia had 300+ infrantry and 250+ tanks in reserve alone that they never used against them. This happens with lots of countries, even small ones. The units are simply not used in war.
* When units are used, they are most often used one by one, which is a bad strategy.
* The AI also mismanages airplanes. It is particularly hurting the eyes to watch a country with a hundred aircraft in the air, just running in circles someone in the corner, while the country's enemies are advancing in another place. The aircraft could just swoop the invaders away quickly, yet they are simply not used. They are sometimes used effectively, but I believe the algorithm could be improved.
* AI still uses ships one by one most of the time and generally moves them too much and too spread out. I would like to see the AI trying to protect their ports and to besiege enemy ports and bombard towns with their ships instead of scattering them wildly around the ocean.

Technologies:
* I've seen an old thread where Balthagor said he received a good list from someone with techs that lead to nowhere (no bonuses, no opinion changes, no consecutive techs, no units, no facilities, nothing, the branch just ends there. For example the "Human Neural Transfer" tech has a duration of 3.4 years, costs 48,500M and has absolutely no advantages or disadvantages and just ends there.)
* Some tech requirements are simply weird. For example this airplane requires a type of submarine technology: 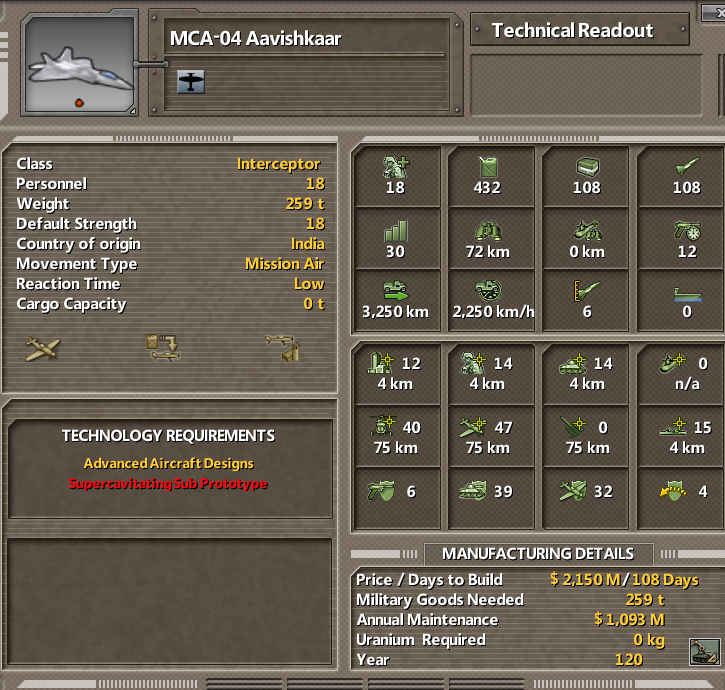 That being said, thank you very much for this great game! I am particularly happy with the overall performance improvements. Even in 2040+ it runs quite fast on even slower speed modes. I wonder what will happen to SR series in years 2020 and 2021! The switch from future to past will be interesting to watch, eh.
Top

I don't think we will get another update on this game, expect maybe for some fixes. From what I can judge on discord, the Goats are currently working on a new game, not a lot has been said about it though.

I'd like to see some modifications to the economy personally. Something seems off to me after a patch a year or so ago where you can't grow GDP beyond about $2500 (especially noticeable in '14 and '36 starts). I think it is related to a change where production capacity is tied to global demand and therefore you can end up building more facilities, but getting less production. Someone posted a thread where they met the worlds demand for a single product from a single facility. I think this then ties back into lower demand, as GDP grow is much harder to get over $2500 (unless someone can tell me where I've gone wrong as I used to have no problems with this). This obviously has an effect on later game stages as GDP doesn't catch up with research and unit costs.


I think the AI still needs tweaking as the above 2 posters have indicated. Ships should form battlegroups if possible, planes should be spread out and the AI needs to learn how to reserve aircraft if they cannot all be based in a location - see France in the '49 scenario.
My SR:U Model Project, get the latest and post suggestions here:

> Many countries (for some unknown reason, I suppose just some kind of algorithm) lose lots of land while having huge armies in reserve.

Maybe they don't have reserve personnel or military equipment to field them?
Top
Post Reply
4 posts • Page 1 of 1